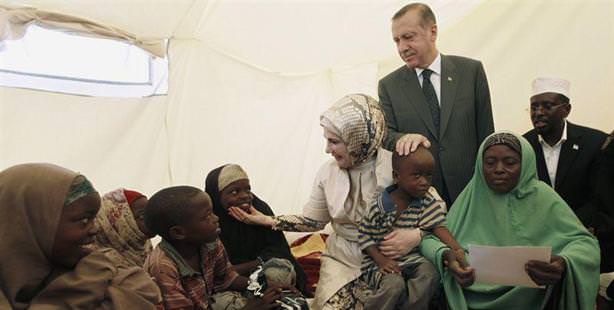 Prime Minister Erdoğan's wife Emine and daughter Sümeyye Erdoğan are joined by Foreign Affairs Minister Davutoğlu on a trip to Myanmar. After attending a series of meetings in the capital, the committee will move on to the camps in Switt on August 9th.

While the aid campaign initiated by the Prime Ministry for the Muslim minority in Myanmar is in full swing, Prime Minister Tayyip Erdoğan's wife Emine and daughter Sümeyye Erdoğan are joined by Foreign Affairs Minister Ahmet Davutoğlu in paying a visit to the region. Part of the intention behind Emine Erdoğan and Davutoğlu's trip is of course to find a way to deliver aid, however Myanmar is notoriously known for only accepting aid from the United Nations. The private plane transporting the Turkish committee has landed in Naypidav, the capital of Myanmar. This will be the first visit paid to the Myanmar government since the first embassy was opened recently.

During her stay, Emine Erdoğan will meet with NGO representatives to discuss whether the Turkish Red Crescent could be allowed access to Arakan. Meanwhile, the possibility of aid being delivered from Geneva through the U.N. will also be discussed.

CLINTON TO BE BRIEFED

After the trip comes to a close, Davutoğlu will be returning to Istanbul to meet with U.S. Secretary of State Hillary Clinton on August 11th. Davutoğlu will be requesting Clinton, who will also have just returned from a tour of Africa, to draw international attention to the crisis in Arakan.

Turkey's Directorate of Religious Affairs Vice-Chairman İsmail Palakoğlu recently announced that they have collected 9,308,000 liras thus far in the aid campaign for the Muslim's from Myanmar's Arakan region and reminded that citizens can donate to the Muslims in Arakan for their traditional charity and alms given during the Ramadan holiday.

This is not the first time Emine Erdoğan has stood up for humanitarian causes. Emine, who will soon be headed for Myanmar to offer moral support to the oppressed Muslim population, also paid a visit to Somalia last year in an attempt to draw attention to the fact that the people in the region were starving to death. During the trip, both Emine Erdoğan and Erdoğan especially devoted their attention to the children there.