After the U.N. Turkey becomes the first to provide aid to Arakan 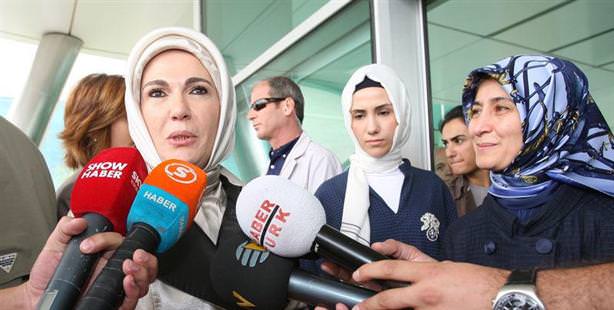 By asking "How would the world react if it had been a Muslim responsible for this massacre?” Emine Erdoğan drew attention to the disinterest in the West to the cause of the Arakan Muslims who are being murdered and forced to emigrate. Erdoğan went on to say “pray for us” as she departed for Myanmar.

Prime Minister Tayyip Erdoğan's wife Emine Erdoğan and daughter Sümeyye Erdoğan are joined by Foreign Affairs Minister Ahmet Davutoğlu and his wife Sare Davutoğlu on a visit to Myanmar in order to deliver aid to Arakan Muslims which are being displaced and killed in religious discrimination by extreme Buddhists in Myanmar. Turkey's Foreign Ministry has announced that Myanmar, which has only ever accepted aid from the U.N. has now agreed to receive aid from Turkey.

Speaking prior to their departure, Emine Erdoğan said, "Pray for us" and expressed that it was absolutely unacceptable that a massacre was taking place in the name of religion. A private plane was commissioned from Turkish Airlines for the trip to Myanmar. Departing from Ankara's Esenboğa Airport, Emine Erdoğan went on to make the following statements:

"This is unbelievable. During this time when our people are trying to follow Buddhist doctrine, I am appalled that its believers are responsible for such acts. The entire world should be trying to handle this situation. I wonder how the world would react if a Muslim was responsible for these massacres? But I do not hear anything, do you hear anything? This is shocking. We need to bring awareness to this situation. Are they trying to drag us into a religious war, I do not know. However it is a very great atrocity. The fact that this violence is being committed in the name of religion is extremely devastating. The entire world needs to bring awareness to this situation."

Pointing out that there is a great humanitarian tragedy transpiring, the scope of which is not even precisely known at present. Erdoğan said, "We will be determining the situation on site. We will be trying to figure out what it is we can do. Like we did in Somalia, we want to provide aid to fulfill people's needs."

Foreign Affairs Minister Ahmet Davutoğlu also made an announcement in which he stated that there was a grave tragedy of humanity taking place in Arakan, Myanmar. Pointing out that this trip, in which the Foreign Minister is also accompanied by a large committee of representatives from humanitarian aid organizations, is the first high-level visit to take place between Turkey and Myanmar. Davutoğlu went on to deliver the following messages:

"Myanmar, who will be taking on the term presidency for the Association of Southeast Asian Nations (ASEAN) in 2014 is currently undergoing a reform process and has therefore, within this framework, become the focus of interest for the international community.

Turkey and Myanmar relations span back to a special time in history. The embassy has uncovered the remains of our ancestors who were brought to Myanmar to fight in different fronts for World War I, and died in battle. We will begin working on visiting them and setting up a war cemetery. The initial stage has revealed an area where there are the remains of 700 of our martyrs. They were killed after being taken here as prisoners by England.

Up until now, Myanmar has never been warm to receive aid from any country or international aid organization other than the United Nations. This will be the first time we visit the Arakan region as a committee. We will be visiting camps where both Muslims and Buddhists are staying. We will be able to give the aid we have come here with. However, we will also be making contact to establish how we will deliver aid here from here on out."

The Prime Ministry Emergency and Natural Disaster Presidency (AFAD) recently announced that they have collected 1,219,000 liras in donations in their aid campaign for Myanmar thus far. An announcement by AFAD states, "We want to thank our charitable citizens who have stood beside our Muslim brothers from the Arakan region during this trying time."