Turkey: the country to offer Arakan most aid 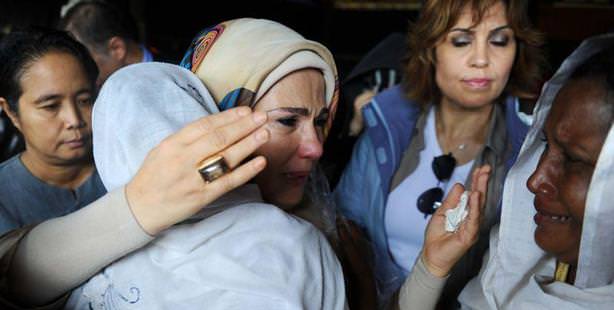 A Turkish delegation including Foreign Affairs Minister Ahmet Davutoğlu, his wife Sare Davutoğlu, Prime Minister Tayyip Erdoğan's wife Emine Erdoğan and his daughter Sümeyye Erdoğan, visited the Rohingya Muslims in Myanmar where they distributed aid and listened to people’s concerns. Emine Erdoğan experienced moments of sadness and stated, “The images were unbearable.” Minister Davutoğlu and his accompanying committee also paid a visit to a Buddhist camp.

Foreign Affairs Minister Ahmet Davutoğlu and Prime Minister Recep Tayyip Erdoğan's spouse Emine Erdoğan paid a visit to the Rohingya Muslims, from Arakan, Myanmar, who are residing in very difficult conditions at the Banduba Camp. The committee distributed aid, marking the first time a foreign nation or entity other than the U.N. has been allowed to distribute aid in Arakan.

During the camp visit, a Turkish Red Crescent official briefed Minister Davutoğlu, Emine Erdoğan and their accompanying committee on the current conditions. According to the official, there are 8,532 people being sheltered at the camp which contains 40 living units, housing ten families each. There are also 801 tents set up at the camp. The Turkish Red Crescent has begun distributing kitchen sets and boxes. Meanwhile, Davutoğlu has announced that they have signed an agreement that as of today Turkish Red Crescent and the Red Cross will begin working together.

"THERE ARE UNBEARABLE IMAGES"

When Emine Erdoğan asked what the biggest problem was for the refugees, Turkish Red Crescent officials stated that the Muslims staying here had a difficult time finding accommodation and food. Emine Erdoğan commented on the experience by saying, "There are unbearable images."

Muhammed Çingi, a Rohingya Muslim, requested to speak with the committee. He not only relayed information about the living conditions at the camp, but he also said they wanted to return back to their residential area and also mentioned that they needed a mosque. Çingi explained that his children need medical assistance and although the Myanmar government is trying to offer support, it is not enough. Çingi was sobbing as he explained that there were 11 members from his family alone and 100 of his fellow villagers staying at the camp. Davutoğlu tried to calm him while Emine Erdoğan was unable to hold back her tears.

THE BUDDHISTS WERE NOT FORGOTTEN

The Turkish delegation moved on to a Buddhist camp where they also distributed aid. Listening to the Buddhists explain their woes, Minister Davutoğlu stated that everyone should have the same rights and that they want Buddhists and Muslims to live in harmony together. Later, Davutoğlu visited a Buddhist priest to which he said, "I believe that under your leadership, both Buddhists and Muslims will be able to live peacefully together. Islam and Buddhism are religions of peace."

Davutoğlu then went on to visit a mosque in the region, where he performed his Friday prayer. The Turkish delegation's visit stirred a lot of attention amongst the Arakanese, who would line up on the road in crowds waving as the convoy passed.