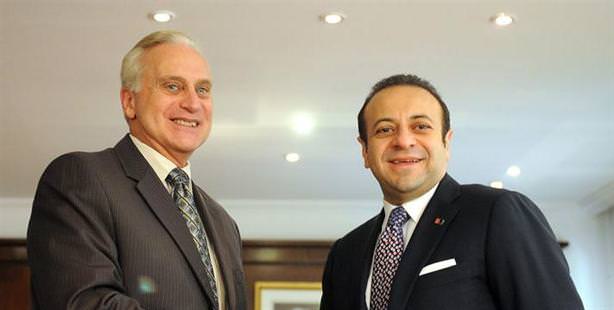 "In trying to save himself, Assad is playing a bad game against Turkey,” states Ricciardone, who inferred that the weapons entering Syria have made their way to the PKK.

The U.S. Ambassador to Ankara, Francis Ricciardone announced that the U.S. and Turkey are working on 'Precautionary Plans" in connection to Syria's future. Stating that they have not reached a decision on setting up a "buffer zone or a no-fly zone," Ricciardone emphasizes "the military option should be the last choice".

"The kidnapping of Hüseyin Aygün was very stupid. It won't benefit the Turkish public, the Kurdish public or anyone. We strongly condemn this act.

Our intelligence-sharing at present is not the type that would involve the abduction of the deputy. We do not compile intelligence on what transpires within Turkey.

We are collaborating both politically and practically in order to help the Syrian public and refugees.

We can share the United States' experience of delivering aid outside of the border in emergency situations. Our assigned military have been in contact for months. They are discussing "Substitute Precautionary Plans'. Of course these are plans at a NATO level. As to determining what sort of military needs there are, we have not gone past this point.

Both the Turkish and American public are peace-loving. We do not want to apply military measures. This should be the last option. The United States public does not want to send our soldiers into a foreign civil war.

There are reports on Iran's role in what is transpiring in Syria. We are trying to increase international cooperation in regards to the transfer of weapons from Iran. Turkey is doing all it can. We want the Iraqi government to do the same.

The weapons that enter Syria are finding their way to the PKK. The Syrian regime is distributing the weapons amongst the regime's supporters. We know that the PKK has now joined forces with the Syrian regime. The Assad regime has always supported the PKK. Assad is trying to divide his own public. In trying to save himself, Assad is playing a bad game against Turkey.

(The fight against the PKK) We want the PKK's ability to stage operations from Northern Iraq to be blocked. Like Turkey, we are also not pleased with the results.

(The Kurdish issue) Just when we say negotiations are going well, someone goes and stages an attack. As a result, negotiations then take a step backwards. It is being done to block negotiations. We support all parties in Turkey. A political solution within democracy must be reached. The U.S., like Turkey is also against a sectarian-based division.

(Armed drones) There are strict rules in the U.S. concerning the transfer of sensitive defense technology. We have not yet reached a solution on this issue. The decision was made to sell Cobras from the Naval Fleet inventory. However, Turkey had additional technical demands. The price issue also surfaced to the agenda. We are ready to deliver.

(Regarding the fallen Turkish jet) We are not in the position to act as jury in regards to where or how the jet was brought down.

What Turkey needs to pay heed to is the freedom of expression. Secretary of State Clinton also respectfully mentioned these concerns. Thoughts should not be made a crime; no one should be imprisoned for what they say."

'THE PKK HAS LOST ITS MIND'

U.S. Ambassador to Ankara Francis Ricciardone paid a visit to EU Minister and Chief Negotiator Egemen Bağış, who stated that the abduction of CHP Tunceli Deputy Hüseyin Aygün shows that the PKK terrorist organization has lost their mind.

This a translation of an article originally written by Okan Müderrisoğlu.