Kidnapped deputy explains the terrorists’ situation in the mountains 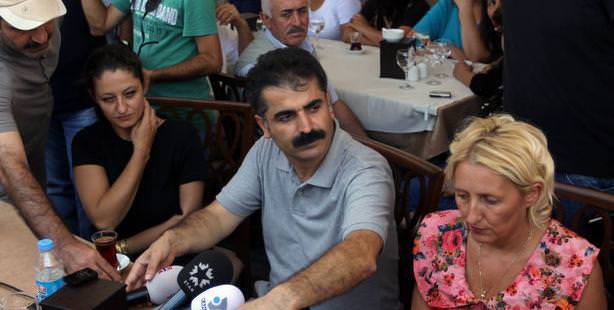 CHP Deputy Aygün, who was held by the PKK for 48 hours, says "the PKK is exerting pressure on Dersim and imposing Kurdish nationalism. The policy the BDP exerts on those in Dersim is equivalent to the policies that were enforced on themselves in the 90’s.”

Just a few short hours after he was released from being kidnapped by PKK terrorists for 48 hours, CHP Tunceli Deputy Hüseyin Aygün, hosted SABAH in his very own home. When he heard that we had come all the way to Tunceli just to speak to him, Aygün was surprised and thanked us. The fact that we have met before due to mutual friends made this meeting that much more special and the suggestion for us to hold this conversation in his home, came from Aygün himself:

What were you doing prior to your abduction?

- I was in the villages of Ovacik. I was writing villagers' petitions in regards to Dersim. In other words I was doing some attorney work. There was actually a different sort of energy in the district. A notice had been distributed, calling on people to not engage in politics with CHP.

In fact, they say that there were two people banished from Ovacık.

- Yes, of course. Our municipal mayor and provincial chairman are also under threat. The PKK has been exerting pressure on Dersim for a long time now. They have been trying to do something in Dersim for awhile now. They impose a single Kurdish identity and nationalism on Dersim. However, the Dersim identity is heterogeneous and religious. They said that those who are in CHP are traitors. The policy the BDP exerts on those in Dersim is equivalent to the policies that were enforced on themselves in the 90's.

Will this pressure continue?

- Yes, it will. This is evident from the notice that was distributed. It may also continue against me. However, I am going to be in the villages again tomorrow and I still won't have protection or a weapon.

What was your initial attitude when you were first faced with the PKK terrorists?

- They lowered their weapons as soon as I got out of the car. They said, 'We will not draw our weapons on you, we have no issues with you we just want to talk.' My initial presumption was that when they first kidnapped me they wanted to say certain things and wanted to realize some of their demands. However, with the intense response and the pressure from the masses, they felt the need to put an end to this action within 48 hours without issuing any criticisms or expressing any of their expectations. The decision was made by a local group. Bahoz Erdal called personally a number of times and asked whether there was anyone else that could have done this. They said, 'No, he is with us'. I think Kandil was also surprised.

Their situation is desperate...

Were they in a desperate state?

They kept saying, 'Don't forget us, we also want to come down from these mountains, we want peace. Brother, don't forget that your brothers are here.' They hugged me a few times. I feel the same thing when I see a soldier's funeral, because they have committed no crimes. As a product of unsolvable politics, these people are becoming sacrifices.

Were you subjected to providing a written statement?

No. They said that they saw me as a friendly power, as a comrade and they said they just want more support when it comes to the Kurdish issue and the halting of the bloodshed.

What happened after you got out of the car?

After a six to seven hour walk, we stopped in a valley covered by trees. They were two people. Then one of them went to the area where the actual militants were staying. I was left with just one militant. The friend who stayed with me was very young and tired, he went straight to sleep. I couldn't sleep. In fact, I was the one who woke him up in the morning.

How many hours did you two talk one on one?

Other than taking breaks to sleep, we talked the entire time. I talked a lot and they listened. They said they liked my books on Dersim. A while later, three or four more people showed up. We listened to all of the reactions on the radio they had and they were also really surprised. Then I turned into an activated bomb for them and suddenly they wanted to get rid of that bomb.

They really had no criticism for you?

In the beginning they started to exert pressure. In the car they said 'You are a good person, don't do politics in CHP'. I told them that I was proud to be a CHP member.

When they released you, how did you say goodbye?

It was a very respectful and emotional farewell. They addressed me as either 'Hüseyin brother' or 'Hüseyin friend.' They frequently called me brother.

They were young kids…

Did going into the mountain affect your perspective in any way?

Those guys there are just young kids; they are the people from this country. They are from Malatya, Van and Diyarbakır. I already knew that the reasons they have gone into the mountains need to be eradicated, however to see it there, to see how they eat, how they get no sleep, to see their desperate state in the mountains, truly affects you in a different way.

This is a translation of an article originally written by Müjgan Halis and Evrin Güvendik.