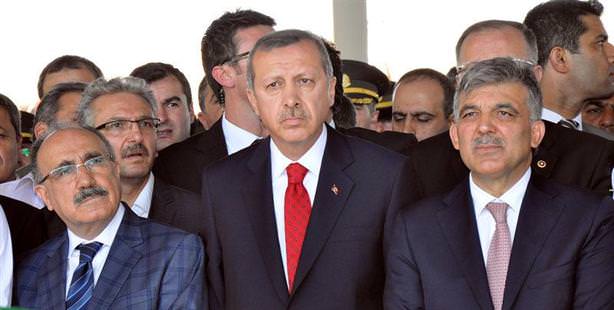 The state’s leaders convened in Gaziantep on Wednesday in order to attend a funeral ceremony for six of the nine victims killed in a terrorist attack which transpired Monday night in a main suburb of Gaziantep.

It was an emotional ceremony as family members of the victims could barely remain standing.

President Abdullah Gül conveyed his emotions by stating, "I want the entire world to see that this attack was in no way a seeking out of rights. This is a terrorist attack organized by people who have lost all humane feelings."

President Gül went on to offer his condolences to the families of those killed and stated that at times like these we need to stand strong. "As a nation, the best response we can give to terrorism and the terrorist organization is to create a strong front, no matter what are differences are and stand arm in arm and shoulder to shoulder against such acts of terrorism."

President Gül went on to announce that he had been recently informed by the Governor that the suspected perpetrators have been apprehended and a further announcement can be expected following a thorough investigation establishing their involvement.

According to an announcement by Gaziantep Governor Erdal Ata, the explosion was caused by the detonation of a vehicle laden with bombs. The incident took place at 19:45 Monday evening just 20 meters' distance from the Karşıyaka Police Station located in Gaziantep's central Şehitkamil district. The explosion, which took place on one of the busiest streets in the city, resulted in setting ablaze a public bus carrying passengers as well as a prison service bus that was transporting correction officers.

The automobile loaded with bombs separated into two with parts strewn all over the scene. Out of panic, those that could fled the scene, however for the high number of wounded it was a struggle to survive. While dozens of vehicles, homes and businesses were damaged in the blast, the police station turned into a transfer station for the wounded as ambulance after ambulance arrived to transport those injured to nearby hospitals. Nine people were killed in the attack, four of which were children, while 66 people were wounded.

The identities of the nine victims of Monday's terrorist attack in Gaziantep are as follows:

Onur Fikret Aker (21) was born in 1991, a soldier in Şırnak who was visiting on holiday leave.

Almina Melisa Aker was just a one year-old, she was born in Gaziantep in 2011.

Süleyman Alkan was three years old; he was born in 2009 and lived in Gaziantep's Yığınlı Village.

Sevgi Gülperi İnanç was 11 years old. She was born in 2001 and was registered to Adana's Seyhan district.

İsmail Daler (30) was born in 1982 and also worked as a corrections officer.

Deputy Prime Minister Beşir Atalay just recently announced that a 13 year-old girl has also passed away in the hospital where she was being treated.

A majority of the wounded were transported to hospitals from the police station located near the site of the blast and have since received treatment and been released. Gaziantep Şehitkamil State Hospital Chief Physician Tamer Tuncer explains that they received 35 patients, most of which were lightly wounded. Tuncer states, ''We have seven patients being held in the emergency room for observation. Two patients are in intensive care, one of which is in very critical condition. We also have two other patients being treated, other than that everyone was tended to and discharged."

Dr. Ersin Arslan explains that out of the 15 patients admitted to the State Hospital, five were treated and discharged, two are currently in intensive care, and eight patients have been admitted and are receiving ongoing treatment. At the Özel Sani Konukoğlu Hospital, four people have been treated and released while four other patients' treatment continues. Meanwhile, relatives and loved ones of those hurt or killed have gathered in front of the various hospitals treating the blast victims as they continue to wait for answers.

Four children were killed in the attack staged in the middle of the sacred Ramadan Bayram. A three-year-old boy Süleyman Alkan, a one-year-old infant Almina Melisa Aker and an 11 year-old girl Sevgi Gülperi İnançwere killed at the scene. Deputy Prime Minister Beşir Atalay announced on Tuesday that a 13 year-old also passed away in the hospital, due to injuries incurred in the explosion.

''The explosion took place right in front of me''

Nineteen year-old Mehmet Derici, who works at an internet café located next to the police station was also wounded in the attack. After receiving medical treatment and being discharged, Mehmet Derici relayed his experience of witnessing the explosion as it transpired and also being suspicious of a black vehicle which pulled up to a nearby bus stop, which turned out to be laden with bombs.

''The explosion took place in front of our very eyes. I was standing outside in front of the door when a black vehicle pulled up to the bus station. A couple of buses came and went, however the black car didn't move. In fact we even said, 'How could someone park here during the bayram?' When it still hadn't left, my boss and I began to get suspicious. Then a crowded public bus pulled up. As soon as the door opened, the vehicle exploded. Those in the back of the bus escaped, however those in the front were all killed," explains Derici.

Prime Minister Erdoğan offered his condolence and God's blessings to those who lost their lives in the attack today and released a statement stating; "This deplorable attack in Gaziantep on the second day of the sacred Ramadan Bayram, shows once again that terrorism does not refrain from targeting civilians nor does it differentiate children and places absolutely no importance on the spiritual values of our great nation.
Terrorism, which targets our brotherhood, unity and peace, will sooner or later lose out to our great nation and security forces' perseverance and determination.

Our government will determinedly continue to counter terrorism with the support from our public and is determined to never allow for communal peace to be harmed nor will it make any concessions on the superiority of democracy and the law."