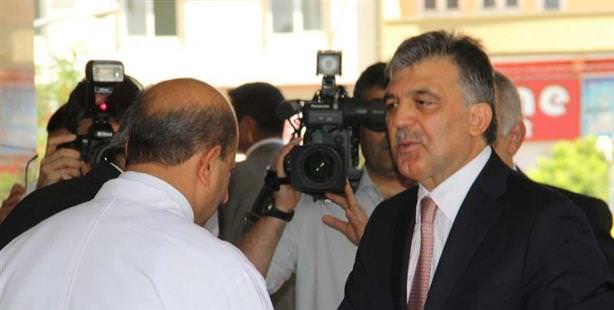 Commenting on the fact that the PKK has not yet claimed responsibility for the attack in Gaziantep on Monday, President Gül stated, “Their file is filled with these sorts of attacks. Therefore, we have absolutely no doubt.”

President Abdullah Gül arrived to Gaziantep on Tuesday where he first visited Governor Erdal Ata to be briefed on the ongoing investigation into the bombing which resulted in nine deaths and 66 wounded. Afterwards, Gül moved on to the Şehit Kamil State Hospital where he visited blast victims; İbrahim Ceylan, who is being treated in the thoracic surgery department, and Umut Akkaya, who has been admitted to orthopedics. Responding to journalists upon his exit, Gül said, "They are doing fine and will be released soon."

From there, Gül attended a funeral ceremony at the Bahaeddin Nakıboğlu Mosque where he was joined by Prime Minister Erdoğan.
Completing his trip in Gaziantep, Gül departed for Bishkek, the Kyrgyzstan capital which will be hosting the Turkish Language Speaking Nations' (TDKÜ) Second Cooperation Council Summit.

Gül delivered the following messages while speaking to the press upon his exit from the Governorship and at the airport:

'THERE IS NO DOUBT'

(The PKK has not claimed responsibility) "Their file is filled with similar events, therefore we have absolutely no doubt it was the PKK.

I want the entire world to see that this incident is in no way a pursuit of rights. This is a terrorist attack organized by people who have lost all humane feelings.

We all need to stand strong on days like these. As a nation, the best response we can give to terrorism and the terrorist organization is to create a strong front, no matter what our differences are and stand arm in arm and shoulder to shoulder against such acts of terrorism.

The only small fact that might be of consolation is the knowledge that the individuals suspected to be involved in this attack, have been detained and are now in custody. Of course there will be an investigation and when their involvement has been proven through evidence, an announcement will definitely be made to the public.

Anyone that has any relationship with terrorists must establish a clear distance between themselves and the organization. I want to especially remind this to all of our citizens. Establishing distance with the terrorist organization and those involved in terrorism and exerting an extremely decisive stance is one of the most important steps to take in order to stop terrorism."

After attending the funeral ceremony in Gaziantep, President Abdullah Gül departed for Bishkek at 14:55 in order to attend the Turkish Language Speaking Nations' (TDKÜ) Second Cooperation Council Summit held in the Kyrgyzstan capital. While Gül was still on the plane, the Ar-Namys and Ata-Meken factions, which joined a coalition government, formed by Prime Minister and the leader of the Republika Party Omurbek Babanov, have resigned from the coalition. Republika Party Assembly Group Chairman Kanatbek İsayev has stated that the departure of these two parties from the coalition basically means the government has collapsed. Prior to his departure, Gül commented on the developments stating, "We hope that the multi-party parliamentary system will successfully prove itself in Kyrgyzstan. This is an important development for all of Asia." Gül also remarked on the summit which will be hosted by Kyrgyzstan President Almazbek Atambayev by stating, "Once a year, Turkish council meets to hold this summit in order to further our already close relations in the Turkish world and to make those relationships even more meaningful and take them to an even higher level."

This is a translation of an article originally written by Müjgan Halis and Erdoğan Yapık.