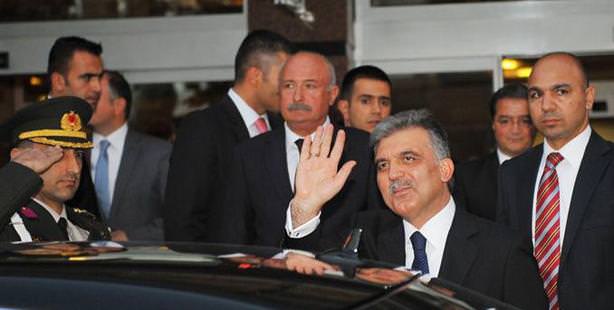 President Abdullah Gül, who has been receiving inpatient treatment for an acute ear infection at Ankara’s Hacettepe University Hospital, was allowed to temporarily leave the hospital yesterday; however doctors did request he refrain from international travel for the next two months.

President Gül left the hospital yesterday for a brief three-hour hiatus in order to attend a high-level summit last night with Prime Minister Tayyip Erdoğan and Chief of General Staff General Necdet Özel.
Meanwhile, ears nose and throat specialists serving in hospitals throughout Turkey have convened to establish a committee on the President's treatment. In an announcement made at Hacettepe Hospital yesterday, doctors stated that base t he president's most recent examinations he would be able to resume his daily activities in a restricted manner and may soon be discharged from the hospital. Doctors did however advise Gül to refrain from travelling for two months in order to avoid reoccurrence of the infection.

Gül was scheduled to go to Switzerland on September 9th and to the United States on September 18th in order to attend the opening of the United Nations General Assembly. Prime Minister Recep Tayyip Erdoğan is planned to go to the UN in his place after paying a scheduled visit on September 15th to Sarajevo.
Meanwhile, the Prime Minister also visited President Gül in the hospital yesterday. After receiving information on Gül's condition, Erdoğan later departed to attend the Council of Ministers meeting.

Four days after being admitted to the hospital, President Gül took a short hiatus yesterday departing at 19:30 for the Çankaya Palace in order to attend a top-level meeting with Prime Minister Erdoğan and Chief of Staff Özel. Upon his departure from the hospital, the president waved to journalists telling them he was fine.

During the two-hour meeting at the Presidential Palace last night, Prime Minister Erdoğan and General Özel briefed Gül on the developments surrounding the recent terrorist attack in Gaziantep.

This is a translation of an article originally written by Ceyda Karaaslan and Yahya Bostan.