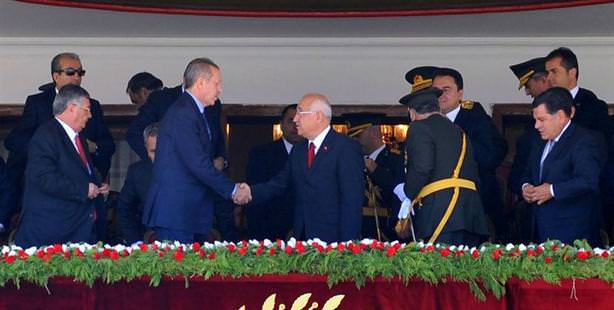 Turkey’s top members of the state have released a series of messages to ring in the official Victory Day holiday, celebrated every year on August 30th to mark the military victory of the Battle of Dumlupınar, the final battle of Turkey’s War of Independence in 1922.

President Abdullah Gül was unable to attend official holiday celebrations due to his being treated for a recurring ear problem and instead released a message stating that anyone who tries to dare threaten the thousands of years of national unity and solidarity in Turkey will be greatly disappointed .

In his message released from his room at Hacettepe University Hospital in Ankara, Gül went on to state, "We are a nation that for a thousand of years now has been the best example of a culture of tolerance, respect and living together in peace in the best way possible. Turkey, which has made great moves in the past, now looks to the future in hope and is continuing securely on its path."

"We will overcome every kind of threat"

Expressing that Turkey, which crowned the Republic with democracy, is now a superior power in the region and an element of stability, offering a valuable contribution to global peace, Prime Minister Recep Tayyip Erdoğan said, "I believe that Turkey, as an undivided nation will overcome all terrorism and threats directed at our brotherhood, and will attain a brighter future."

Erdoğan went on to emphasize, "What befalls us today, is despite all of the challenges to continue rising and gaining strength through this spirit of brotherhood which has persisted for a thousand years since we founded the Republic."

Speaker of the parliament and Deputy Prime Minister Cemil Çiçek stated that a powerful and developed Turkey offers the security for peace, stability and development in this region which is currently suffering significant problems. "We want peace and stability in our region, and for basic rights and liberties to be safeguarded and the bloodshed to be halted immediately. The terrorist organization will not be able to obstruct Turkey, during this era in which the nation is realizing a number of significant initiatives. Turkey will continue to strive for political and economic stability and increase its potential to become a leading nation."

CHP, or Republican People's Party, Chairman Kemal Kılıçdaroğlu referred o certain powers that as in the past would like to weaken and divide Turkey by stating, "We are determined to fight against these powers just as we did 90 years ago. We will fight altogether to protect our brotherhood and against terrorism which wants to divide our nation."

MHP, or Nationalist Movement Party Chairman Devlet Bahçeli said that August 30th represents what a hurt nation can accomplish. "It should not be forgotten that the victory on August 30th was the work of our Turkish military." Bahçeli went on to remind that the host of the Victory Day celebration was switched from the military to the presidency last year.