"How long are we going to watch an entire generation being wiped out?" 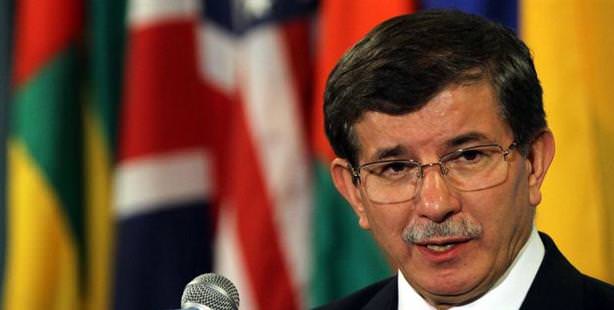 Speaking at a U.N. Security Council meeting on Thursday to discuss the Syrian aid crisis, Foreign Minister Ahmet Davutoğlu challenged the U.N. by stating, “I was expecting this meeting to produce tangible solutions to the suffering of the Syrian people.”

"We don't have anything new to say to thousands of Syrians who suffer at the hands of the regime as the U.N. is trapped by inaction," stated Davutoğlu, disappointed that yesterday's meeting produced neither a resolution nor a statement approved by the 15 Security Council members. Ankara has repeatedly urged the United Nations to protect displaced Syrians inside their country as the number of refugees swell in neighboring states.

"How long are we going to sit and watch while an entire generation is being wiped out by random bombardment and deliberate mass targeting?" Foreign Minister Ahmet Davutoğlu asked the Security Council which was which was attended by ministers from Syria's neighbors including Lebanon, Jordan and Iraq and chaired by France, who served the presidential term for the month of August.

"We need to ask ourselves whether our good conscience is comfortable about such inaction? We know very well the cost of procrastination. Srebrenica, Halepje and Gaza … If we do not act against such a crime against humanity happening in front of our eyes, we become accomplice to the crime," Davutoğlu told the council.

Foreign Minister Davutoğlu went on to explain that Turkey has spent 300 million dollars on the refugees thus far and said that the support coming in from the international community has only been symbolic.
Davutoğlu proposed a five-item action plan, which consists of the U.N. visiting neighboring nations' refugee camps, joint action by the Security Council to put an end to the air bombardments in Syria's city centers, focusing on the displaced Syrians that have had to leave their homes. If despite these measures, Syrians citizens are still forced to seek shelter elsewhere for their own safety, then Syrian refugees need to be accepted in the international arena and the U.N. Refugee Agency should form a joint committee consisting of the UNHCR and neighboring nations in order to deal with the refugee crisis.

The following is the full transcript of Foreign Minister Ahmet Davutoğlu's address at the August 30th U.N. Security Council Meeting:

Mr. President,
I wish to start by expressing our thanks to the French Presidency for organizing this timely and very important meeting on Syria and inviting us, the neighboring countries, which bear the brunt of the crisis in Syria.
I also extend our appreciation to Deputy UN Secretary General, Mr. Jan Eliasson and UN High Commissioner for Refugees, Mr. Antonio Guterres for their lucid and comprehensive briefings on the situation.
When I received the invitation, I decided to come without hesitation.
It was a meeting at the Security Council which is the primary organ for the maintenance of the international peace and security and the issue was Syria, which has been seriously threatening both regional and global peace and security for a long time.
The meeting seemed very significant, because it was organized by the Security Council, after the absence of a required action and determination to put an end to the brutality and bloodshed in Syria for the past 18 months.
I was encouraged particularly by the fact that the humanitarian dimension which calls for an urgent action would be on the agenda and become hopeful that the Council could finally act with one voice, taking long-overdue steps.
Apparently, I was wrong about my expectations.
I understand that the Council today will not be able to put forward a unified position, yet again, to stop the humanitarian tragedy. This meeting will not end even with a Presidential or Press Statement, let alone a robust resolution.
Not even all members are represented in this meeting at the level of Foreign Ministers. While I regret the absence of some of my colleagues, I would like to believe that their non-participation is not an indication of their level of interest and concern in view of the developments in Syria.
The situation in Syria does not need further description. Everything is taking place in front of our eyes. Everyday a new massacre is being committed against the Syrian people. Now, the regime started to deploy fighter jets against the people, in addition to heavy artillery and tanks.
How long are we going to sit and watch while an entire generation is being wiped out by random bombardment and deliberate mass targeting?
Let's not forget that if we do not act against such a crime against humanity happening in front of our eyes, we become accomplice to the crime.
We need to ask ourselves whether our good conscience is comfortable about such inaction?
We need to ask ourselves how are we going to explain such inaction while we preach the coming generations about being virtuous and righteous?
Do we really need to revisit the 90s and repeat the same mistakes?
We know very well the cost of procrastination.
Srebrenica, Halepje and Gaza …
These all went into the annals of history as the symbols of the heavy price that the civilian population had to pay, because the UN Security Council did not act on time. There is no reason to make this notorious list any longer.
UN Secretary General, Mr. Ban, acknowledged during his recent visit to the Balkans that: "We must learn from the lessons of Srebrenica," and went on that: "The international community failed to provide the necessary protection to many people who were killed at the time when they needed our support."
This is actually what is happening right now in Syria.
Although the international community made abundantly clear its position in view of the situation in Syria through several UN General Assembly resolutions, each of them passed with more than 130 votes in favour, still the UN Security Council fails to provide the necessary protection to the people of Syria who need our support.
We can't put the United Nations again in such an uncomfortable situation to apologize for the inaction or negligence about the tragic situation in Syria.

Mr. President,
Under the circumstances, we wish to suggest that the following practical steps should be taken by the United Nations in the face of the current humanitarian disaster in Syria:
1. A visit by the Security Council to the camps in the neighboring countries should be organized to see the impact and to have the first hand information about the situation.

2. A unified approach should be pursued by the Security Council on stopping the indiscriminate aerial bombardment of the residential areas which leads people to be displaced internally.

3. The focus should be on solving the issue of IDPs within the borders of Syria.

4. If the Syrians would have to continue to run for safety despite such steps, necessary measures should be taken to absorb them internationally.

5. There can be a joint committee comprising the neighboring countries and the UNHCR to deal with the refugee issue. This Committee should be given a mandate by the UN Security Council. Such a Committee could also facilitate the work of the Joint Special Envoy.

Mr. President,
As I said in the beginning, I was expecting this meeting to produce tangible solutions to the suffering of the Syrian people.
Still, we don't have anything new to say to thousands of Syrians who suffer in the hands of the regime as the UN system is entrapped in inaction.
The people of Syria find this situation extremely difficult to swallow.
Even if the UN, particularly the Security Council, continue to be paralyzed while the regime in Syria violates every known value, law and moral principle, Turkey would nevertheless continue to uphold the principles of the UN, if necessary on its own, and defend the moral values dictated by the good conscience of the international community.
We are not only facing a serious crisis, but also a test for humanity. If we shy away from our responsibilities today, we will be accountable to coming generations and face a harsh verdict before history.
The humanity must always prevail over insanity and cruelty.
Thank you, Mr. President.