“How can I call someone who embraces a terrorist a politician?" 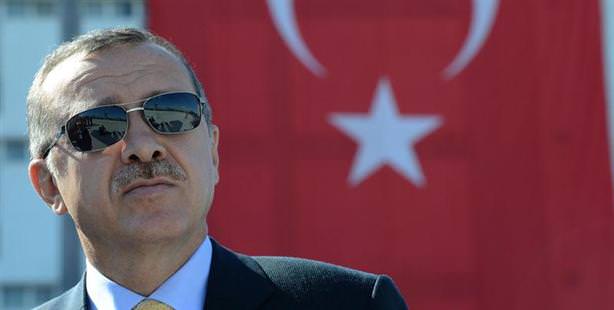 Prime Minister Erdoğan slammed the BDP by saying, “You will only get so far with the support of the terrorist organization, and then you’ll leave just as you came". Hurling criticism to BDP Co-chair Demirtaş, Erdoğan asked, “Whose side are you on? Are you siding with terrorists or terrorism, or are you on the side of those that want to put an end to terrorism in this nation?"

Prime Minister Recep Tayyip Erdoğan issued harsh criticism to the Peace and Democracy Party, or BDP, while responding to questions from the press, including SABAH newspaper Editor-in-Chief Erdal Şafak, on a television show broadcast on Kanaltürk.

Erdoğan strongly refuted the BDP Co-Chair Selahattin Demirtaş's claim the PKK is in control of 400 kilometers of land by asking, "Are you on our side or are you siding with the pigs? This is virtually the same as treason."

If the BDP continues to act in this manner, "they will leave the parliament, in the same way they came in" states Erdoğan who went on to harshly criticize the BDP members pictured embracing terrorists in Şemdinli. "They have gone beyond conducting politics; I don't know any deputy that acts this way."
During the interview, Prime Minister Erdoğan went on to deliver the followings messages on terrorism and the BDP:

ARE YOU SIDING WITH THE PIGS: "The announcement made by a Co-Chair of the BDP that 400 km of Turkish soil is under the PKK's control, is one that would scorch the lungs of any one of our citizens that says they are this great nation's true children. This statement is a huge lie. However, even beyond that lie is the question, whose side are you on? Are you siding with terrorists or terrorism, or are you on the side of those that want to put an end to terrorism in this nation? There is an Anatolian saying that says, 'Are you on our side or are you siding with the pigs?'

As a Co-chairman of a political party in the Turkish Grand National Assembly what exactly were your intentions when you made this statement and what was your evidence based on? When you say 400 km, did you mean 400,000 meters squared? How have they taken over control of this region? How can you prove this? This for Turkey is virtually treason."

YOU WILL GO JUST AS YOU CAME: "There is one thing we always say and that is this; if you are going to practice politics then you need to do so without making any concessions on democracy. However, if your intentions are to take up space in the parliament through the support you garner from the terrorist organization and not through conducting politics, then you will only get so far. After that, you will go, the same way you came in."

THE EMBRACE BETWEEN BDP MEMBERS AND TERRORISTS: "The images of nine deputies embracing terrorists are not something that can be easily swallowed. Those images have gone beyond what being a politician is. We do not know any deputy that acts this way. How can I conduct politics with someone who embraces a terrorist? How can I call someone who embraces a terrorist a politician? I cannot consider them to be a politician. What sort of negotiations do you hold with these people? If there is a party we can negotiate with then we will. The strings of this political party are completely in the hands of the terrorist organization and it is for that reason that he (Demirtaş) cannot say anything other than what he has already said."

THERE IS NO KURDISH ISSUE, THERE IS JUST THE PKK: "We will do all that we can to pave the way to finding a solution, I do not accept that there is such a thing as a Kurdish issue. There is no longer a Kurdish issue in Turkey, the nation has overcome this. There is however a terrorist issue, a PKK issue. There is political 'Kurdism'. We are continuing to deal with these issues. However, no one can say that Turkey issues policies based on refusal, denial or assimilation. That is because I call my Kurdish brothers my brothers, I do not hold that over them."