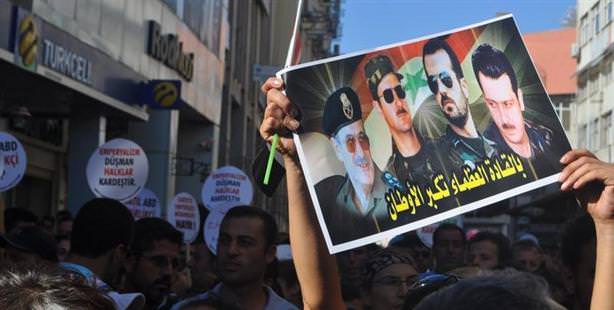 A rally held in Hatay on Saturday, which started off being for World Peace Day, quickly transformed into a demonstration of support for Bashar Assad.

According to sources it was Assad's militia groups Shabiha and the Syrian secret service who were responsible for igniting what become a pro-Assad and anti-AK Party rally. The prime suspect in charge of organizing the insidious scheme is none other than Mihraç Ural.

While reactions to the demonstration of support for Assad staged in Hatay over the weekend continue to grow, allegations have surfaced that the organization was in fact an event staged by the Syrian secret service al-Mukhabarat and the Shabiha (a militia who have taken an oath to support Assad).

Dr. Muhammed Rahhal, a well-known activist for the Syrian opposition who now resides in Turkey states, "This demonstration was completely organized by al-Mukhabarat and Shabiha." Similar allegations place Mihraç Ural as the chief orchestrator of al-Mukhabarat and the Shabiha's plan. Shopowners in Hatay refer to the event as provocation and express their concern for what transpired on Saturday.

Led by individuals who referred to themselves as members of the "Anti-Imperialist Intervention of Syria Platform", approximately 2,000 people gathered in Saturday in a rally of support for Assad and against the AK Party. Demonstrators waved posters of Bashar Assad and chanted slogans in Arabic along the lines of "We would sacrifice out blood and our souls for Assad" and others exalting Bashar, Bassel and Maher Assad.

According to Sadettin Molla, Spokesman for the Turkmen Opposition currently staying in Yayladağ, Hatay, this event showed traces of Shabiha's involvement. Molla states, "We believe that this demonstration was staged intentionally. There are a lot of people here that are from the same lineage as Assad and for the past ten days now, they have been preparing for this rally.

The Shabiha is attempting to escalate incidents in Turkey, however, it is a Turkish national, Mihraç Ural, who took on a leading role in organizing this event. These groups are behind all sorts of provocative efforts."

Speaking on behalf of the Arab opposition, Şihab and Ebu Ahmed commented by stating, "The demonstrations were a result of the Assad-loyal Shabiha militia instigating the Alevis and Nusayri in the region. Shabiha militants are sent here by the Assad regime in order to instigate problems between Antakya residents and Syrian refugees."

According to allegations, al-Mukhabarat and Shabiha are attempting to dispel the propaganda that "After Syrian Alevis, Turkish Alevis are next!" Once again, Mihraç Ural, who is known to have close ties with Assad, is considered to be one of the leading figures involved on organizing the plan to provoke the Alevi population in Hatay.

THE INTENTION IS TO AGGRAVATE THE PUBLIC

Since February, Ural has been staging meetings with Shabiha members in Adana, Mersin, Iskenderun and Hatay in an effort to cause contempt between the public and Syrian refugees. Ural is also supposedly responsible for having the PKK settle into regions along the Syrian border. According to these same allegations, it was Mihraç Ural who spread the idea of using the PKK card against Turkey to Bashar Assad.

SO WHO IS THIS MİHRAÇ URAL?

Mihraç Ural is known to be a leader of an offshoot of the THKP-C (Turkish People's Liberation Party-Front) which formed in Syria after moving from Hatay. Mihraç Ural is slated to be in cohorts with the Syrian secret service, al-Mukhabarat. Ural is also known to have close relations with the Assad family. Ural was also the individual who introduced PKK leader Abdullah Öcalan to Hafez Assad in Damascus and is also slated to be the individual who had Doğu Perinçek meet with Öcalan in his headquarters in Syria.

"THE MUKHABART IS TRACKING OPPOSITION MEMBERS IN TURKEY"

It turns out that the influence of the Al-Mukhabarat-directed Shabiha has also been seen recently in Turkey. Dr. Muhammed Rahhal, a Syrian opposition member who was also attacked at the hotel where he was staying in Antakya, shared his experience with SABAH: "Al Mukhabarat is operating within Turkey and is closely following members of the Syria opposition. I was attacked at the hotel I was staying at and was told that they were going to kill anyone who stood up against the Assad regime. The Syrian regime does harbor close relations with certain groups in Turkey. These groups are especially active in the Hatay region, where a majority of refugees are now seeking shelter. They are in close contact with the Syrian government and it is very clear that they have been receiving intelligence from individuals in the region. These people are in a sense acting like Assad's soldiers," states Rahhal.

Also sharing with us his views on the pro-Assad rally recently held in Hatay, Rahhal states, "In an attempt to mask the ongoing massacre in their own country, the Assad regime is trying to push Turkey off the field by bringing contention here. The demonstration in Hatay was organized by groups that came in from Syria. These people even brought in the signs and flags used in the rally and distributed them amongst the Nusayri in an attempt to gain support. This was organized entirely by al-Mukhabarat and Shabiha," says Rahhal.

Meanwhile, locals are extremely apprehensive regarding the developments and emphasize the need to remain unified during these trying times.

Burhan Çetin (Aksaray Neighborhood Official): "The majority of people here do not support the chanting of slogans in support of Assad. They say that group was not from Hatay. No matter what happens however, they will never be able to tear apart our brotherhood."

Nasrettin Eskiocak (An Alevi Dede): "We have been living on this land as brothers for years and this environment of peace and tolerance cannot be easily broken."

Ali Çağlar (Shopkeeper): "As residents of Hatay, we are all concerned. What actually concerns us the most is the presence of people, who we don't know where they are from, wandering our streets."