"These international puppets will never attain their objective" 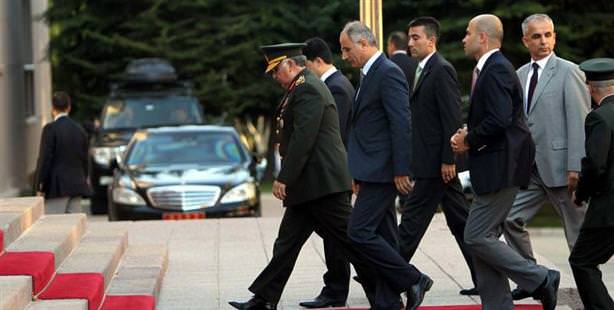 Ankara’s reaction to the treacherous attack in Beytüşşebap, Şırnak has been harsh. Prime Minister Tayyip Erdoğan emphasizes the fact that these perpetrators will never be allowed to realize their intentions.

A steadfast resolution in the fight against terrorism was the message delivered in a state summit held yesterday in response to the PKK attack in Beytüşşebap, which resulted in the deaths of ten soldiers. President Abdullah Gül condemned the attack and stated, "Those who have made our nation suffer in the worst way possible will absolutely have to pay for this."

In his message in response to the attack, the president went on to state, "Despite the reforms and healthy democratic steps taken, they have applied violence and bloodshed to once again put their dirty ambitions on display. The separatist terrorist organization is playing a contemptuous game. Those internal and external supporters of this traitorous game will sooner or later understand that they have miscalculated and they will pay the price. It should also not be forgotten, that those who believe they have a cycle of opportunities will eventually be defeated."

THERE WILL BE A RESPONSE

Noting that this time the traitorous face of terrorism, which is nourished by blood and violence, has shown itself in Beytüşebap, Turkey's Grand National Assembly Speaker Cemil Çiçek stated that terrorists, who use weapons to try to disrupt peace and security will face the fiercest response from Turkey's security forces. "Turkey will never make concessions for terrorism. We will continue this struggle effectively until not a single terrorist wielding a weapon remains." Çiçek also stated that as Turkey continues this fight against terrorism, the nation will also continue to advance democracy and liberties and will further progress and develop.

Prime Minister Erdoğan sent a message of condolences to Chief of General Staff General Necdet Özel, stating, "May God have mercy on those soldiers who died as martyrs for their country."

In his message on the attack, Erdoğan stated the following: "I want everyone to be aware that Turkey will continue to fight against terrorism with determination.

No matter what insidious provocation or despicable scenario this terrorist organization, which has become the puppets for dark international circles, chooses to embrace, we will never allow for these perpetrators to attain their objectives."

In the message emphasizing 'reason and determination' Erdoğan stated, "We will never fall into the traps of traitors trying to transfer their rage and hatred on our nation."


Nationalist Movement Party, or MHP, Chairman Devlet Bahçeli also expressed a harsh reaction to the atrocious attack by stating, "Those that do not draw a line with terrorism or do not distance themselves from whomever is defiantly working to proliferate terrorism will soon be faced with the magnificence of the Turkish nation and its sanctions."

Peace and Democracy Party, or BDP, leader Selahattin Demirtaş also delivered an interesting message following the atrocious attack. Demirtaş stated, "I ask for God's mercy for all of those killed in Beytüşşebap and offer condolences for those close to them and their families in pain. We share everyone's suffering. A lesson needs to be learned by all from what has transpired and this issue needs to be approached conscientiously and ethically."

Prime Minister Tayyip Erdoğan and Chief of General Staff General Necdet Özel held a meeting at the Prime Ministry following the terrorist attack in Beytüşşebap in which ten soldiers died in the line of duty. No press announcement was made following the three hour meeting, however according to the information obtained, the Beytüşşebap attack was thoroughly discussed and the steps to be taken next were covered in detail.