U.S. senators in Turkey with Syria on the agenda 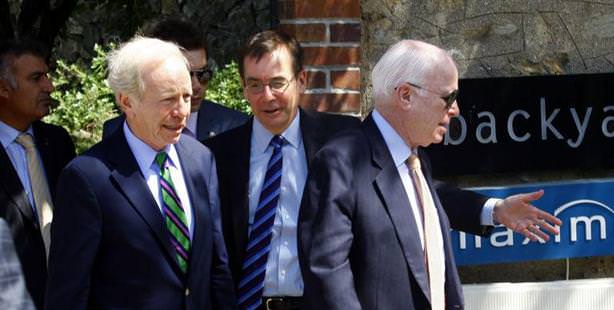 U.S. senators John McCain and Joe Lieberman enjoyed a meal at Etiler's Backyard yesterday, where they also met with a Syrian youth.

Arriving to Istanbul with CIA Director David Petraeus, U.S. senators John McCain and Joe Lieberman went to a restaurant named Backyard in Etiler and met with a young man from Syria. No further information has been obtained on the meeting which transpired behind closed doors.

U.S. senators Lieberman and McCain accompanied CIA Director David Petraeus on his arrival to Istanbul yesterday. After settling in to the Conrad Hotel, the two senators headed to Etiler's Bebeköy Residence to enjoy a meal at Backyard. While the two shared a meal they also met with a young man from Syria. After spending about an hour at Backyard, the two departed without responding to questions from the press.

Last April, John McCain and Joe Lieberman came to Turkey to pay a visit to the tent cities set up in Yayladağı, Hatay. The two were greeted with flowers given by Syrian children and from there the senators met with representatives for the Syrian refugees and paid visits to the wounded staying in Hatay's 'tent cities.'

During a press conference held at the time, both senators expressed their gratitude to the Turkish government and public "for the overwhelming generosity they are showing to their Syrian neighbors in need," and stated, "As Syrians are fleeing for their lives, Turkey is welcoming them into their country by the thousands. This has not been easy or cost-free for Turkey, but it is the right thing to do, and it demonstrates the compassion of Turkey's great democracy."

Joe Lieberman had pointed out that although the visit coincided with the 'failure' of the Annan plan that was not their intention he said and went on to state, "We respect Mr. Annan's desire to find an end to the killing in Syria. Unfortunately, Bashar al-Assad does not share this goal. That fact has been clear to many of us for months, but it should now be undeniable for everyone.

Lieberman also said that based on America's founding principles, they should be helping the Syrian public; however all they are hearing are words and not seeing action, when it comes to the international community. "All of the Syrians we met with are grateful for the humanitarian assistance that many nations are providing, as are we. But this does not change the basic fact: The international community is failing the people of Syria," stated Lieberman.

US senators John McCain and Joe Lieberman will be departing Turkey today. CIA Director David Petraeus, whose visit and meetings were kept under wraps, departed last night at 22:40 on a U.S. Air Force plane.