Further democracy for Kurds and reinforced military operations on PKK 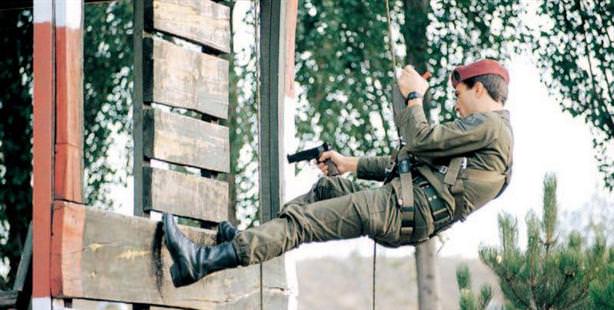 The Maroon Berets, a special operations command of the Turkish Armed Forces, will be soon be taking on a more active role in the fight against PKK terrorism. On General Özel's orders, commandos will now be posted in outposts throughout the region.

TAF is getting ready to stage a strong retaliation against the PKK, which has changed strategies recently as displayed by the mass attacks staged in Şemdinli followed by Beytüşşebap. The government wants to begin enforcing increasingly severe military measures in the fight against terrorism before losing all of the democratic achievements attained in the region.

The new steps the government will soon be taking were clarified during the three hour long summit held on Monday between Prime Minister Tayyip Erdoğan and Chief of Staff General Necdet Özel, the longest thus far of its kind. Accordingly, Erdoğan will be closely tracking developments with a new command echelon recently appointed by the Supreme Military Council, to be deployed to the region.

A series of critical military appointments are being centered on the Şırnak-Hakkâri line. Commander appointments were selected amongst experienced members that have served in commando schools. The commanders selected for the region were from units who directly trained professional soldiers. The newly appointed commanders will also be joined by an increased number of professional soldiers.
One of the most significant steps to be taken will be the increased role the Maroon Berets will have in the region. There will also be an increase in air-supported point operations similar to those staged in the Kazan Valley.

Perhaps one of the most note-worthy appointments made during the August Supreme Military Council was that of General Galip Mendi, who was appointed to the Second Army Command responsible for the Iraqi and Syrian borders. In addition to being one of Özel's most trusted commanders, Mendi is also known for being one of the founders of the Special Forces. Yet another experienced general was appointed to take over the military command in Hakkari. Isparta Mountain and Commando School Center Commander Major General İsmail Metin Temel has been appointed to the Hakkari-Yüksekova Third Infantry Division Command. Another Major General, Hakan Atınç was brought on to oversee the critical Hatay region. The regional commanders are preparing to dispatch troops and direct operations from military outposts. According to the information obtained, General Özel has issued the precise order for the commanders to stay with the soldiers at military outposts.

A 1.5 HOUR MEETING WITH HASHIMI

With the recent increase of PKK attacks, Prime Minister Tayyip Erdoğan decided to act on the current initiative of consulting to meet with one of the leading politicians in the region Hashim Hashimi. Erdoğan hosted the Kurdish politician in the Prime Ministry Building in the capital, where the two spoke for an hour and a half. Erdoğan supposedly listened to Hashimi's observations on the region and the two exchanged ideas on what could be done.

WE ARE TRACKING THE TARHAN SITUATION

Prime Minister Erdoğan recently spoke with Ramazan Tarhan, the brother of the AK Party Hakkâri Provincial Chairman Mecit Tarhan who is suspected to have been abducted by the PKK. Erdoğan expressed his condolences and assured Tarhan they were closely following the situation and all state institutions were doing all they can to track down his brother."