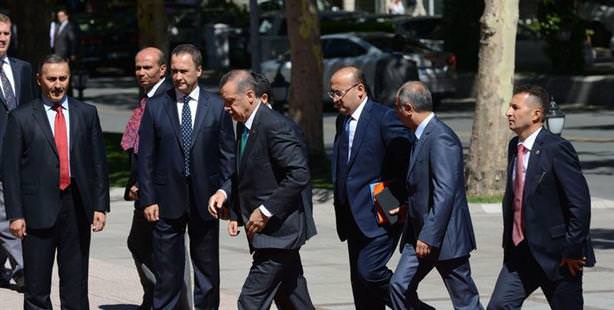 Today, Prime Minister Recep Tayyip Erdoğan kicks off an intense schedule of international meetings. The Prime Minister, who will be abroad until September 15th, will be visiting six cities in three countries before he returns to Turkey.

The Prime Minister's first stop is Kebele, Azerbaijan where he will be joining the Azerbaijani government for a High Level Strategic Council meeting. Later, Erdoğan will move on to Seki City. Azerbaijani President Ilham Aliyev will be chairing the Azeri committee; while Erdogan's committee will include Deputy Prime Minister Bekir Bozdağ, Foreign Affairs Minister Ahmet Davutoğlu, Minister of National Defense İsmet Yılmaz, Minister of Energy and Natural Resources Taner Yıldız, Minister of Economy Zafer Çağlayan and Minister of Transportation Binali Yıldırım. Erdoğan is to discuss regional and joint issues as well as bring the topic of energy to the table.

Erdoğan's second stop will be to the capital of Ukraine, Kiev, where he will attend yet another High Level Strategic Council meeting. Erdoğan will be co-chairing the meeting with Ukrainian President Viktor Yanukovych. After the meeting, Erdoğan will move on from Kiev to Yalta where he will attend the ninth annual Yalta European Strategy meeting. Erdoğan and Ukraine President Yanukovych will both be delivering speeches as the guests of honor. From there, Erdoğan will move on to his third stop Simferopol where he will meet with the Prime Minister of the Autonomous Republic of Crimea before departing for the Bosnia Herzegovina capital Sarajevo. There he will pay a visit to the grave of the 'philosopher king' Aliya Izzetbegovic. Erdoğan will then meet with Bosnia Herzegovina Prime Minister Nermin Nicsik and will receive an award handed out every year in honor of the founder of Sarajevo, Isabey Ishakovic.

With the series of state appointments made last week, the changes to Prime Minister Tayyip Erdoğan's personal security detail went into effect yesterday. Two members of Erdoğan's previous security detail that were always by his side, Security Department Director Mehmet Yüksel and Zeki Bulut, who was like the Prime Minister's shadow, have officially resigned from their positions. As of yesterday, in their place are now Security Department Chairman Ramazan Bal and Security Manager Muhsin Köse.