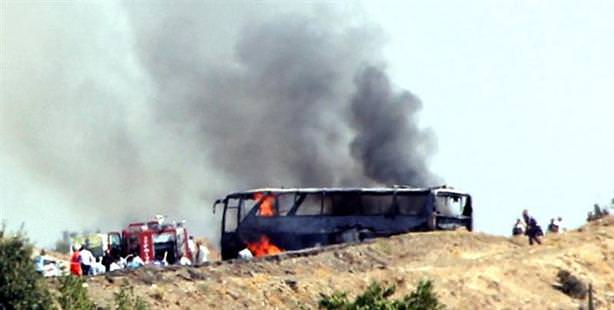 This well-calculated attack has brought to surface the question of how the PKK obtained such heavy weaponry and how were they able to transport them to the site of the attack. Just three days prior, eight policemen were killed in a mine attack on a police bus in Bingöl's Karlıova district

A convoy of five buses accompanied by civilian and armored vehicles transporting unarmed civilian soldiers from Elazığ to Muş was attacked by rocket launchers on the exit for Bingöl. A bus hit by a rocket went up in flames while a total nine soldiers were killed in the attack and 70 wounded, four of which are stated to be in critical condition.

The atrocious attack took place at around 12:30 Tuesday, 15 kilometers in to the Bingöl-Muş highway. The convoy was forced to slow down when faced with an uphill turn, which is precisely the point where the PKK struck, from three different angles using rockets and long-barreled weapons. A rocket hit one of the buses which immediately caught fire and live combat began between the terrorists and the soldiers protecting the convoy. Soon after, the terrorists fled the scene and ambulances and firefighters began arriving to the ambush site.

Six soldiers were killed by rockets, while three were shot dead. Seventy soldiers were wounded, four of which are in critical condition. Firefighters extinguished the blazing bus and the wounded were transported to hospitals in Bingöl, Muş, Erzurum, Elazığ and Malatya. Initially the death toll was announced as ten; however doctors were able to revive one of the soldier's hearts after he was brought to the hospital.

Bingöl Governor Mustafa Hakan Güvençer stated that there were also five civilian and ten armored vehicles in the convoy. "This evil organization has shown its ugly face once again, just like it did in the atrocious attack of 1993," stated Güvençer. In 1993, the PKK killed 33 unarmed soldiers at a roadblock in the city of Bingöl. "They have staged a traitorous attack on our civilian and unarmed soldiers. The convoy consisted of 200 unarmed soldiers returning from vacation or medical leave," the Governor stated.

An air supported operation was initiated in the area immediately following the attack. Meanwhile, police have released an announcement seeking a white vehicle with the license plate 23 DD 923 which have may have been used in the attack.

President Abdullah Gül has sent a letter of condolences to the Chief of the General Staff Gen. Necdet Özel in which he strongly condemns the inhumane and heinous attack staged by the terrorist organization. In his message, Gül also commended the security forces who continue to unrelentingly fight against terrorism.

This is a translation of an article originally written by Ömer Şanlı and Alper Sancar.