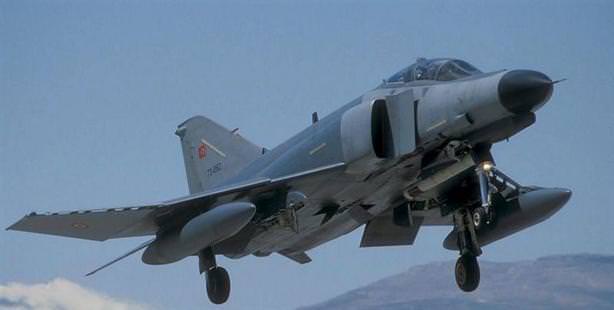 The General Staff Military Prosecutor released a report on Tuesday detailing the cause of the crash of a Turkish RF-4E jet on June 22nd.

The report stated "Findings show that as our plane was flying in international air over the Eastern Mediterranean, a missile shot by Syria's air defense system detonated behind the left portion of the plane. The blast resulted in negatively affecting the flight conditions for the plane and the pilots. As a result, the plane continuously lost altitude as it veered left, and then crashed into the water, landing slightly lying on its left side, with the aircraft's front nose in the air.

"Parts of the plane wreck retrieved underwent a metallurgy test. The results showed that on the plane's fuselage there were traces of potassium chlorate, which is used as an oxidizing agent in missile fuel and consists of the main substance used in warheads.

The results of the investigation by the Istanbul Forensic Medicine Institute showed that there were trace elements of the following explosives detected on the jet: RDX (Hexogen), HNX (Octogen), TNT (2,4,6-Trinitrotoluene) and PETN (Pentaerythritol Tetranitrate)."

The report also stated that records from the radar warning system showed that the plane did receive a signal from a missile. Meanwhile, the report also clarified that there were absolutely no findings pointing to any technical malfunctions in the plane, which could have led to its downing.

The Turkish Armed Forces (TAF) Military Prosecution also announced that they would be continuing to their widespread and thorough investigation into the incident, in order uncover all aspects leading to the downing of the Turkish phantom jet.