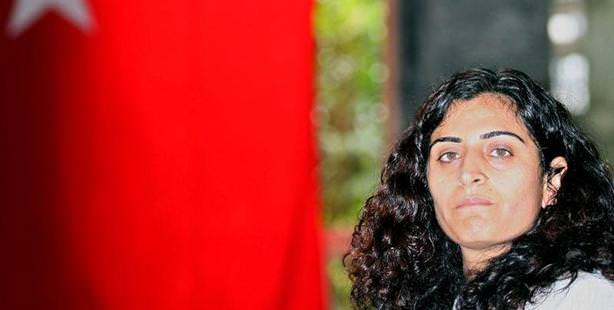 BDP deputy Sebahat Tuncel has been sentenced to eight years and nine months prison time for being a member of the PKK terrorist organization in a trial that superseded her election as a member of parliament.

After six years, the court has reached a verdict on the ongoing trial of Peace and Democracy Party, or BDP, Deputy Sebahat Tuncel, sentencing her to serve eight years and nine months in prison for being a member of the PKK terrorist organization. The court has also prohibited Tuncel from leaving the country. If the sentence is approved by the Supreme Court of Appeals and her deputy title relinquished, then Tuncel, who has already served eight months in prison, will have to return to jail to serve another mandatory five years.

Tuncel was not present for yesterday's ruling by Istanbul's Tenth High Criminal Court which sentenced Tuncel to eight years and nine months for being a member of a terrorist organization.

The court will be sending the file to the Supreme Court of Appeals, where if it is approved it will be passed on to parliament. The General Assembly will convene to discuss revoking Tuncel's duty as deputy. If Tuncel's duty is revoked, she will be required to serve a minimum five-year sentence. Once Tuncel has served the minimum requirement she may be eligible for court-ordered probation.

"DON'T EVEN WAIT FOR THE SUPREME COURT"

Commenting on the sentence issued, Tuncel stated, "There isn't a terrorism problem in Turkey, there is a Kurdish problem. Nearly 10,000 of my comrades are in jail. If they think that by arresting one more person they can solve the issue, they are mistaken. If they are going to solve the Kurdish issue by arresting me then they can go ahead and arrest me. They do not need to wait for the Supreme Court."

On November 5th, 2006 Tuncel was arrested for attending a PKK-PRD (Democratic Liberation Party in Kurdish) meeting in Northern Iraq wearing the same clothes as other organization members. In 2007, Tuncel was elected as an independent deputy for Istanbul's third district and was subsequently released from prison.

The AK Party will be looking into lifting the immunity of nine BDP members caught on footage embracing PKK terrorists. Prime Minister Recep Tayyip Erdoğan's statement that once the assembly reopened they would begin assessing the immunity of BDP members is now being evaluated by fellow AK Party members. The majority feel that immunity should be revoked for the BDP deputies who harbor connections to the PKK. According to the information obtained, ultimate action will be taken in accordance to the findings of the investigation into the nine deputies who were seen embracing PKK terrorists in Şemdinli.

This is a translation of an article originally written by Veli Sarıboğa and Zübeyde Yalçın.