Turkish PM: “There is no other Jerusalem” 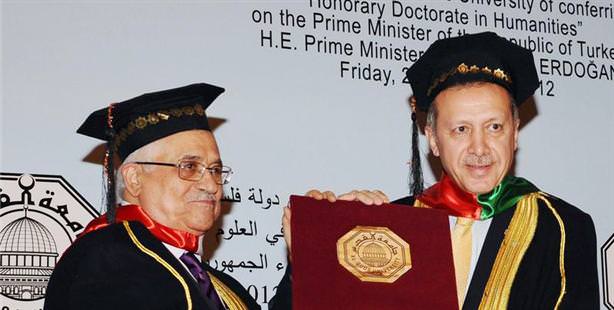 Erdoğan was the recipient of an honorary doctorate degree from the Palestinian Al-Quds University.

Unable to receive the honor at the university itself due to Israel's blockade, Prime Minister Recep Tayyip Erdoğan was presented with the degree in Ankara.

During his address at the ceremony, Prime Minister Erdoğan delivered the following messages:If Jerusalem is destroyed to the occupation, there is no other Jerusalem and there never will be. Explain this to everyone you see.

I promise that the Turkish Republic will offer continuous support to Palestine and Palestinians as we have done before, as we do now and as we will continue to do in the future.

I have never trusted Israel's words up until now and I still don't. We do not want to see Palestine as an open-air prison. The current Israeli administration has absolutely no correlation to the Torah.

Palestinian leader Mahmud Abbas says, "One day we will return to Jerusalem."