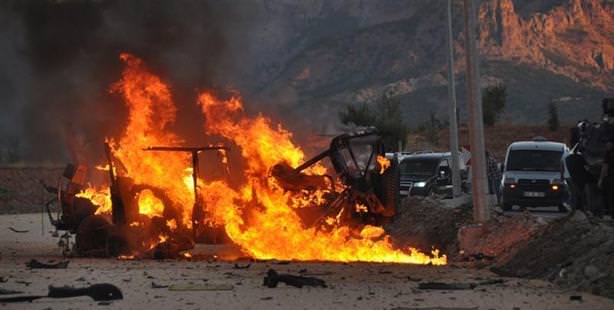 According to the initial figures coming in, a terrorist attack bombing has resulted in the deaths of seven soldiers.

The previously placed explosives were remotely detonated by PKK terrorists just as an armored military vehicle which was providing security for a civilian plated minibus carrying military personnel passed by. The highly explosive blast resulted in setting two vehicles on fire.

Firefighters from the Tunceli Municipality quickly extinguished the fire as ambulances rushed to the scene of the explosion. The initial death toll from the blast is seven soldiers killed in the line of duty and one civilian wounded.

The attack comes just one week after PKK fighters killed 10 soldiers and wounded at least 60 last when they fired rockets at a military convoy travelling between the provinces of Bingöl and Muş, also in eastern Turkey.