“The Gül couple are true friends” 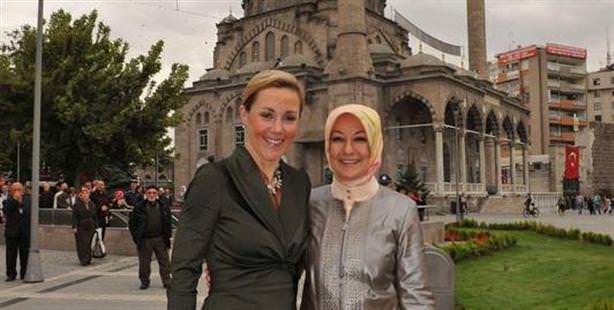 Bettina Wulff, the wife of Christian Wulff, the former president of Germany, has published a book entitled "Jenseits des Protokolls" (Beyond Protocol) in which she praises her friendship with Turkey’s first lady Hayrünnisa Gül. Criticizing commentary that they are “different women,” Bettina asks, “Why, because one wears a headscarf and the other does not?”

In a book penned by Germany's former first lady Bettina Wulff, which has made the top spot in the best-sellers list, President Abdullah Gül and his wife Hayrünnisa Gül are mentioned in length and referred to as "true friends." In her book, which details the events that led to her husband's resignation, Bettina Wulff also includes excerpts from her life in office, one of which is about her close friendship with her Turkish counterpart Hayrünnisa Gül.

"WE BUILT A FRIENDSHIP" Bettina Wulff writes, "If Christian and I were truly able to build a friendship with any other politician and his wife, that would be the relationship we had with Turkey's President Abdullah Gül and his wife Hayrünnisa. Shortly after Christian was elected, we hosted Gül and his wife in Berlin. A month later, in October, we were the guests of the Gül couple in Turkey. We continued to meet and we built a relationship that was independent of our husbands."

IT DIDN'T END WITH THE RESIGNATION…

Wulff explains that they would refer to each other casually and even exchanged correspondence a few times beyond her husband's resignation. Therefore, she says, she was angered at articles that would emphasize how supposedly different they were. "Why are we different, she asks. "Is it because one wears a headscarf and the other doesn't? This is an extremely superficial perspective. Despite having different faiths, Hayrünnisa Gül and I get along very well," writes Wulff.

In another part of her book, Bettina Wulff mentions a photograph hung up in her son Leander's room. Explaining that during a reception held in honor of the German National Football Team at the Presidential Palace, her son took a photograph with Mesut Özil and Bastian Schweinsteiger, Bettina Wulff writes, "His photograph, taken with Mesut Özil and Schweinsteiger still hangs on the wall in his room."

This is a translation of an article originally written by Ismail Erel.