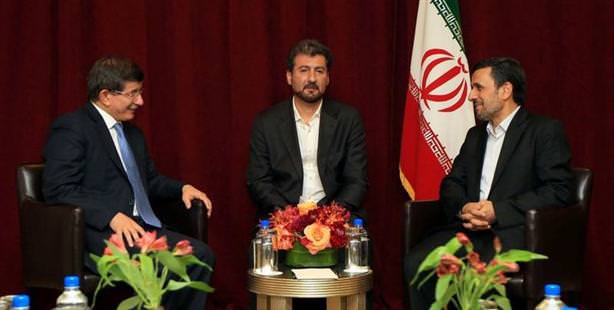 During the meeting held at the Warwick Hotel, the press was allowed a short entry to capture footage. The meeting, which lasted an hour, was not previously included in the Foreign Minister's schedule but supposedly transpired by request from the Iranian side. Speaking with Ahmadinejad, Davutoğlu touched upon a variety of issues currently permeating the Islamic world and mentioned that a number of people were in consensus regarding dealing with these situations in a clear and transparent manner. In return, Ahmadinejad relayed his sentiments on the issue.

Davutoğlu and Ahmadinejad also exchanged views on the situation in Syria. Foreign Minister Davutoğlu shared the advice Turkey has tried to relay to the Assad regime since the start of Arab Spring. Expressing that Turkey stands by the Syrian public, Davutoğlu, praised the recent meeting between Turkey, Egypt and Iran which took place in Cairo. The foreign minister urged Iran to use its influence to halt the bloodshed in Syria and said that they believe the recent Cairo 'contact group' meeting was a beneficial step within this framework.

Ahmadinejad expressed that they also want the violence to stop and that they are exerting efforts to this end and will continue to do so. Both sides agreed that Turkish-Iran cooperation was of utmost importance at which point Davutoğlu brought up the issue of terrorism and conveyed Turkey's expectations from Iran on the matter.

During his meeting with the Iranian president, Davutoğlu also brought up the issue of certain remarks made by senior Iranian authorities and relayed Turkey's discomfort as a result of these comments. Ahmadinejad responded by expressing how much importance Iran as well as himself personally place on harboring good relations with Turkey. Ahmadinejad went on to state that the remarks did not reflect Iran's stance or the country's position. The Iranian president assured that only statements made by authorities such as himself, the Speaker of the Parliament or the Foreign Affairs minister represent Iran's stance.

While in New York, Minister Davutoğlu also attended a series of mini-summits by the Organization of Islamic Coordination as well as on Somalia and also met with his counterparts from Pakistan, Sudan, Nagorno-Karabakh, Nepal, Bhutan and Singapore.