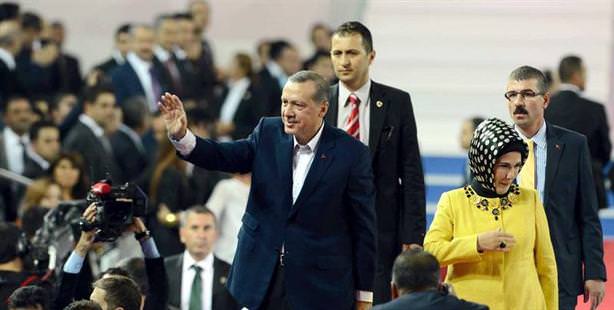 Addressing thousands of party members and regional leaders at a congress of his Justice and Development (AK) Party, Erdoğan said the era of military coups in the nation of 75 million people was over.

Prime Minister Recep Tayyip Erdoğan vowed to forge a more diverse constitution and turn a new page in relations with Turkey's 15 million Kurds, in a speech lasting almost two and half hours and meant to chart the AK Party's agenda for the next decade.

"We called ourselves conservative democrats. We focused our change on basic rights and freedom," Erdoğan told thousands of cheering party members at the congress in a sports stadium in the capital Ankara.

"This stance has gone beyond our country's borders and has become an example for all Muslim countries."
Leaders including Egyptian President Mohamed Mursi, Kyrgyz President Almazbek Atambayev and Masoud Barzani, president of Iraq's autonomous Kurdistan region, were among the guests.

Under Erdoğan's leadership, the AK Party has won three consecutive landslide election victories since 2002, ending a history of fragile coalition governments punctuated by military coups and marking Turkey's longest period of single-party government for more than half a century.

Per capita income has nearly tripled in that time and Turkey has re-established itself as a regional power, with its allies seeing its mix of democratic stability and Islamic culture as a potential role model in a volatile region.

"Turkey has shown the bright face of Islam," Khaled Meshaal, Hamas's leader in exile, told the congress. "Erdoğan, you are not only a leader in Turkey now, you are a leader in the Muslim world as well."

Prime Minister Erdoğan pledged a new chapter in relations with Turkey's Kurds but called on them to denounce violence by the PKK terrorist group.

Masoud Barzani, president of Iraq's autonomous Kurdistan region, told the congress: "As the people living in this region, we have to cooperate. No problem can be solved with violence ... We will do our best to help Erdoğan to end the bloodshed."