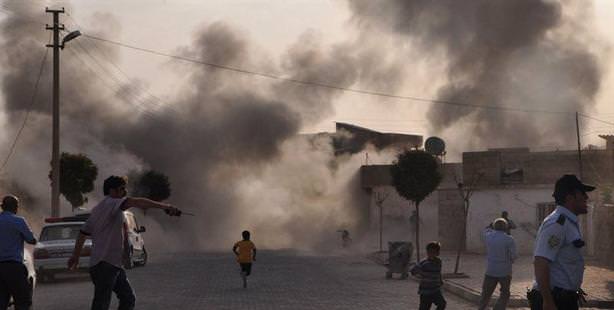 A mortar bomb fired from Syria landed in a residential district of the southeastern Turkish town of Akçakale on Wednesday, killing a woman and four children from the same family and wounding at least ten other people.

According to the initial information coming in, five people were killed and ten injured in the blast. A significant number of ambulances and reinforcement security have been dispatched to the region.

A cloud of dust and smoke rose up over low-rise buildings as residents ran to help the wounded. Others, infuriated by the increasing spillover of violence from Syria's civil war, took to the streets shouting protests against the local authorities.

"It (latest mortar round) hit right in the middle of the neighbourhood. The wife and four children from the same family died," Ahmet Emin Meshurgul, local head of the Turkish Red Crescent stated, adding he knew the victims personally. "People here are anxious, because we got hit before. Security forces tried to convince people to empty the neighbourhood near the border, but now we've been hit right in the middle of the town," he said. Witnesses say they saw three police officers among the wounded being taken to hospital.

According to the information obtained, those killed were three children, their mother and a female neighbor. They were said to be struck from Syrian shelling outside of their home.

Another child and three security officers are amongst the injured receiving treatment, two of which are said to be in critical condition.

Spokesperson for the United States Department of State Victoria Nuland has condemned thedeaths of five Turks by Syrian artillery shells that landed in the south-eastern town Akçakale at the Turkish-Syrian border.

"We are offering our true-hearted condolences to those families and we strongly condemned the incident that is frankly a breach of Turkish sovereignty" Nuland told the reporters during her daily press meeting.

U.S. Secretary of State Hillary Clinton expressed outrage on Wednesday after a mortar bomb fired from Syria killed five people in southeastern Turkey and said Washington would discuss with Ankara on what the next steps should be.

"We are outraged that the Syrians have been shooting across the border. We are very regretful about the loss of life that has occurred on the Turkish side," Clinton said in remarks during an appearance with Kazakhstan's visiting foreign minister.

"We are working with our Turkish friends. I will be speaking with the (Turkish) foreign minister later to discuss what the best way forward would be," Clinton said, calling the spread of violence beyond Syria's borders "a very, very dangerous situation."

Foreign Minister Ahmet Davutoğlu phoned U.N. Secretary General Ban Ki-moon to brief him about the incident and also spoke with senior military officials and Syria crisis mediator Lakhdar Brahimi, his ministry said in a statement. Davutoğlu signaled over the weekend that Turkey would take action if there was a repeat of a mortar strike which damaged homes and workplaces in Akçakale last Friday.