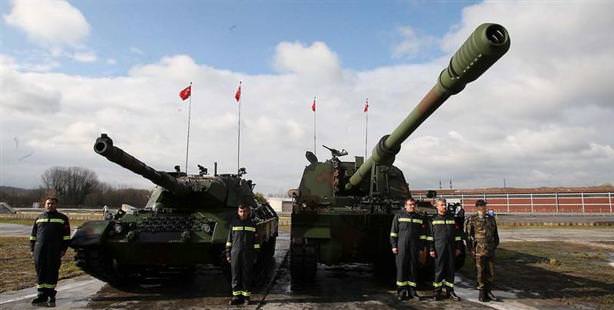 Turkey’s retaliation for the Syrian attack on Akçakale, which resulted in five deaths, began by determining targets in Syria by using an ANTPQ36 land radar. F-4’s then marked the designated points, followed by border troops using Turkish-made Fırtına howitzers which shelled the targets into the morning.

With new rules of engagement put into play by Turkey following the Akçakale incident, the Turkish Armed Forces used the latest technology in staging a retaliation attack. The targets struck in Syria were detected through utilizing ANTPQ36 land radars. The targets were designated by laser pointers in F-4s which took off from Diyarbakır. Ensuring residential areas were not targeted; shots were made by the 20th Armored Brigade, which had been dispatched to the border region two weeks ago. Three separate rounds were made shot the Syrian border by Fırtına howitzers targeting artillery units in Tel Abyad.

Before Turkey's retaliation began, the Turkish military had to determine whether the shelling that hit Akçakale was fired from the Syrian Army or from the opposition. A study into the type and range of the artillery showed that the firing came from artillery units belonging to the Syrian army as the opposition does not have access to the same form of artillery. What followed was at approximately 18:00 on Wednesday evening and in coordination with the Air Force Command, border troops began striking at predetermined targets. The second round of artillery shelling was conducted at 22:00 the same night and went on intermittently until 01:30 am. The last round was shot in the early morning hours yesterday. As a result of Turkey's bombing, 300 Syrian soldiers were forced to abandon their posts.

Firing was done using the first ever national artillery system Fırtına (Storm) howitzers. Coming in second only to F-16 warplanes, the Fırtına is the Turkish Armed Forces second most effective weapon.
With an advanced suspension system, the Fırtına is able to easily maneuver through all sorts of land, including rugged terrain and is capable of being ready to shoot within 30 seconds while in motion.

The Fırtına is capable of making six shots in one minute, after which it is able to switch position within 30 seconds, bringing the risk of being subjected to enemy fire to a minimum.

With the Fırtına's unique shooting control system developed by ASELSAN, the howitzers are able to shoot three artillery rounds back to back and at up to 40 kilometers' distance. National Defense Minister Vecdi Gönül says, "It's now apparent how right we were to invest in developing these howitzers at the time."

BORDER TO BE REINFORCED

Two weeks ago units from the 20th Armored Brigade Command were dispatched to the region equipped with howitzers and anti aircraft weaponry. According to the information obtained, at the start of the week, troops stationed in Maltepe, Istanbul were also dispatched to the border.

In addition, a reinforcement of troops will also be brought into the region from Ankara. Both Hawk and Stinger type missile and anti aircraft units positioned in the region were put on full alert in order to further fortify the Turkish military's air defense system.