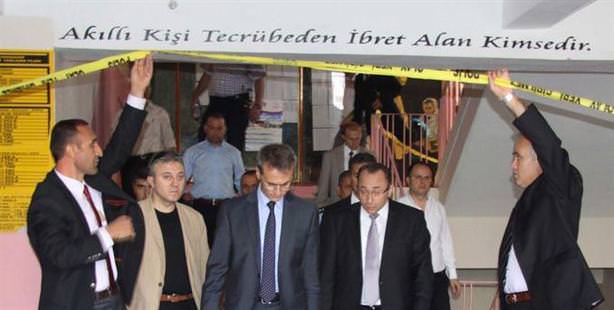 The PKK terrorist organization staged an attack on nine schools, one in Diyarbakır, eight in Şırnak, injuring two teachers and three students.

The series of attacks began at approximately 08:15 on Monday at the Şehitlik High School in Diyarbakır, when a group of approximately ten, attacked the school with percussion bombs and Molotov cocktails. The heinous attack, which paid no heed to the dozens of children and teachers in the vicinity, resulted in wounding literature professor Yusuf K. and geography teacher Gülay B. as well as a senior student. A small-scale fire erupted following the attack which was quickly contained and the injured parties were immediately rushed to the hospital.

"THIS IS WHAT I CRY ABOUT"

Responding to the press while inspecting the site of the attack, Diyarbakır Police Chief Recep Güven stated, "We hate those who have managed to turn these children into terrorists, this is what I cry about. How could a child attempt to burn their teacher? How could they make these children want to come to school to hurt their teachers? Just look at these children. What else can I say, how can they contribute to humanity?"

In Diyarbakır, Governor Mustafa Toprak has cancelled classes for the day. Meanwhile, two people have been detained in connection to the incident.

A simultaneous attack was also staged on eight schools in Şırnak. PKK supporters wearing masks threw Molotov cocktails, fireworks and stones into the school yards of the Cumhuriyet and Anafartalar elementary schools, the Bener Cordan, Atatürk, Fatih, İdil and Multi-Programmed high schools and an industrial-vocational School simultaneously Tuesday morning. Panic ensued as teachers tried to protect the students who were in the schoolyards during the attack. Two students were injured and immediately taken to the İdil State Hospital. Police arrived to the various crime scenes in armored vehicles and took widespread security measures in the region. Parents and relatives took their children home.

Meanwhile, police in Diyarbakır received an alert regarding a suspicious backpack on Fatih Street in the Bağlar district and immediately took strict security measures in the vicinity. The bag contained 40 percussion bombs and Molotov cocktails which were ready to be used.

In another incident, a municipality employee was found dead in his vehicle in Bitlis. Gülmehmet Alptekin was found dead in a parked vehicle on the Tatvan-Van highway. The governor has since announced that the terrorist organization was responsible for the death.

This is a translation of an article originally written by Faysal Karadeniz and Bayram Kaplan.