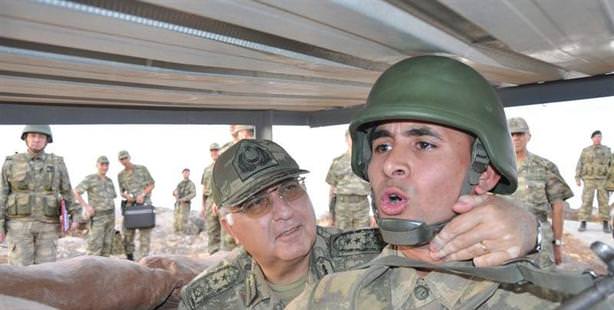 The day prior, General Özel and the commanders accompanied him, arrived in Adana, in order to pay a visit to the İskenderun 39th Mechanized Infantry Brigade Command first thing yesterday morning. Later, Özel, Kıvrıkoğlu and Mendi were joined by the İskenderun 39th Mechanized Infantry Brigade and Garrison commander Brigadier General. Hakan Atınç to inspect the military's border outposts. After conducting further inspection in Hatay, Özel and the commanders accompanying him arrived to the Kilis Öncüpınar 4th Border Troop Command where they were briefed by the troops.

The top military committee moved on to the 5th Armored Brigade Command in Gaziantep, were they also received a briefing. And later, Özel, moved on to the border town of Suruç, Şanlıurfa in order to conduct further inspections of the 2nd Border Troop Command. General Özel also visited an observation point which overlooks Syria, from where he surveyed the region using a thermal camera and also spoke for awhile with troops positioned there.

This is a translation of an article originally written by Adsız Günebakan.