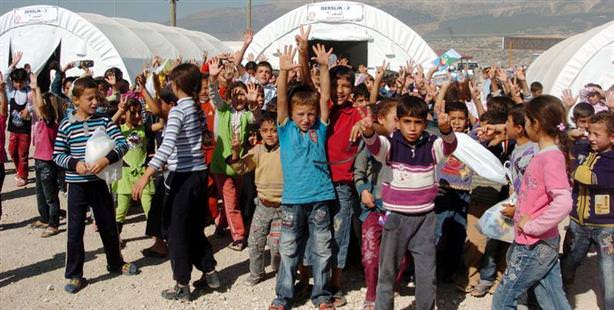 With the number of Syrian refugees flocking to Turkey surpassing the 100,000 figure, the state has decided to set up additional camps to accommodate the continuing influx. The present goal is to reach at least an increased 16,000 person capacity with new camps in Akçakale, Nizip and Harran.

When the number of refugees coming in from Syria reached the 100,000 psychological threshold, the Prime Ministry decided to take further action, bringing new measures to the table. As a result, the Prime Ministry reached a decision to set up additional camps in order to accommodate the consistent influx of Syria nationals.

Due to the increasing conflict in Syria of late, the number of Syrian nationals seeking refuge in Turkey has reached 101,834. In the past, the 100,000 figure had been announced as being Turkey's psychological threshold when it comes to accepting Syrian refugees. Foreign Affairs Minister Ahmet Davutoğlu had stated, "If the number of refugees surpasses 100,000 then we should be able to shelter them within Syria. The UN could set up camps."

In response to a question posed last week on the issue, Prime Minister Erdoğan stated, "The 100,000 figure is truly a threshold for us, however as we have always said we could surpass the 100,000 number. As you know, during the Saddam era, we hosted 750,000 Peshmarga from Northern Iraq. We will evaluate what needs to be done in light of this tyranny in Syria and will take whatever steps necessary. We will continue to stand by our oppressed brothers in Syria," stated the Prime Minister.

At present, there are 101,834 Syria refugees staying in camps set up in seven provinces in Turkey. In total, 144,938 Syria refugees have entered Turkey, however 43,104 later returned to their countries for various reasons.

HOW MANY PEOPLE DOES EACH CAMP ACCOMODATE?