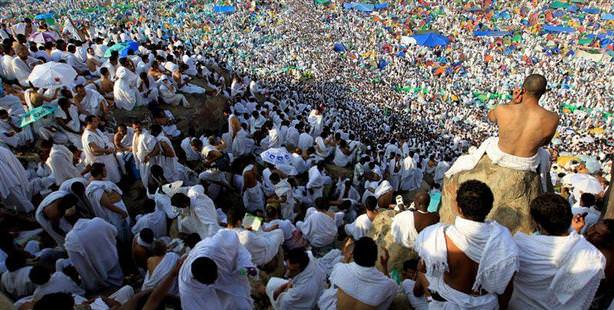 Three and a half million pilgrims have consecrated their religious vows at the Hajj. Chairman of Turkey’s Directorate of Religious Affairs recited the ‘Vigil Prayer’ for the Turkish pilgrimage candidates. cv

Nearly three and a half million pilgrims gathered on Mount Arafat yesterday to perform their final vigil to complete the Hajj pilgrimage. Having departed for Mina the night prior, thousands of Hajj pilgrims set up camp in the Arafat region, located just 25 kilometers southeast of Mecca.
Saudi Arabian Minister of Interior Affairs and Hajj Committee President Prince Ahmed recently announced that 1,752,932 visas were obtained for Hajj pilgrims from out of the country. Women consisted of 46 percent of that number. When counting the number of those that entered the country illegally, there are currently an estimated 3.5 million conducting the Hajj pilgrimage. Prince Ahmed has also announced that pilgrims have arrived to Mecca from 189 different countries.

Turkey's Directorate of Religious Affairs set up a field hospital for Turkish candidates. The hospital, set up on a 600 cubic-meter square area, has 420 medical personnel on hand. The Turkish nationals, who were laid up at the hospital, were transported by ambulance to Arafat in order to allow them to complete the vigil, considered to be one of the most important elements of the Hajj ritual.

THE IMPORTANCE OF ARAFAT

Arafat, located 25 kilometers southeast of Mecca is an extremely significant and integral location for the Hajj pilgrimage ritual. One of the most important elements of completing the Hajj involves standing vigil at Mount Arafat. Pilgrims face the direction of the Kaaba as they stand vigil at Arafat, which is considered to mark the end of the religious ritual. Turkey's Directorate of Religious Affairs President Prof. Dr. Mehmet Görmez conducted an approximately 40-minute prayer during the vigil, which brought him to tears from time to time as he included prayers for the entire Islamic geography spanning from Syria to Arakan.

AK Party Deputy Chairman Numan Kurtulmuş was also on hand to congratulate the Turkish pilgrims on their religious feat.

This is a translation of an article originally written by Ertuğrul Erbaş.