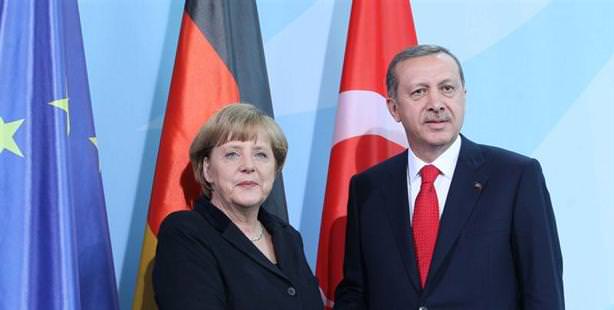 During a two-day trip to Germany, Erdoğan received a confirmation of support in the fight against the PKK from Chancellor Merkel. Commenting on the ongoing hunger strike in Turkey, Erdoğan said it was just a show as the leaders continue to feast while they expect inmates to die for their cause.

On a working trip to Germany, Prime Minister Tayyip Erdoğan met with German Chancellor Angela Merkel for approximately an hour and a half and then participated in a joint news conference during which Erdoğan delivered a number of messages spanning from reaching a consensus with Merkel on the fight against terrorism as well as commenting on the hunger strike ongoing in Turkey.

"There is just one person on a death strike in Turkey at present and of course they are receiving medical attention. However, members of the political party and the terrorist organization which tell them to die are feasting on lamb kebabs amongst themselves. We have the photos to prove it. I could hand over information of the dates and the locations right now. On July 17th, deputies and certain members of the separatist organization were in Kızıltepe, Mardin at an event hosted by Ahmet Türk. While on the one hand they are feasting on kebab, on the other they are ordering these inmates to die. As for the hunger strike, at present there is no such thing, It is a complete show. I personally sent my minister to prison to see for himself. Over half have already given up.

When you look at what it is they actually want, it is the release of the leader of the seperatist terrorist organization. Nowhere in the world would displays such as these direct the law or render it inexistent. Our issue in Turkey is not just with our Kurdish brothers, but it is one of 75 million. As the prime minister of the Turkish Republic, I am trying to overcome the woes of 75 million.

NATO needs to step up their concern with the Syria issue. We desperately need Germany's help on this matter. It is crucial for Germany to address these sensitivities in both their relations with Russia and with China.

We now have 105,000 brothers from Syria in Turkey. Including the Syrian refugees in Lebanon and Jordan, this figure rises to 300,000. As for within Syria, 2.5 million people have been forced to abandon their homes. We must prevent this disaster together.

(On establishing a buffer zone) If the UN Security Council has not made such a ruling, then we have no authority to go ahead and designate such an area in Northern Syria. A high price was paid in establishing no-flight zones in the past in Iraq. However, we do not feel it is right for that same price to be paid here. First and foremost, the UN Security Council needs to make this decision.

(On the Israel-Palestine issue) We experienced the Mavi Marmara disaster. After which we said that Israel must apologize, must pay compensation and must lift the blockade on Palestine. If they do so, then the normalization process will begin. Another significant step is the restructuring of Israel. I said to the Chancellor, 'You have torn down your walls, however Israel continues to build them. This is something that is impossible to understand.'

(On discussing terrorism with Merkel) 'They said they would continue to increase their support. The EU's stance against the separatist terrorist organization is absolute. We want to be able to see the results of this absolute stance. There should not be a terrorist organization backed by the West. The West needs to openly and clearly display their stance. We actually have extradition agreements with most western nations. As a result of these agreements we expect the expedition of such criminals. As prime minister, I frequently approve the extradition of criminals to these countries; I have extradited criminals to Germany, France and England. We are expecting the same thing and that is our most natural inherent right."

At the start of the joint press conference, Merkel expressed that Turkey is a close allied nation to Germany. Praising Turkey's economic success, Merkel stated, "Turkey is experiencing an extremely pleasing economic development. We say that we wish we had such a dynamic development in the Euro zone. Within an economic framework, Turkey's situation is very good. We hope that bilateral relations will also increase," stated Merkel. German Chancellor Merkel, who is expected to visit Turkey in February of next year, also thanked Turkey for its assistance to Syrian refugees."