Davutoğlu: Do not disperse! 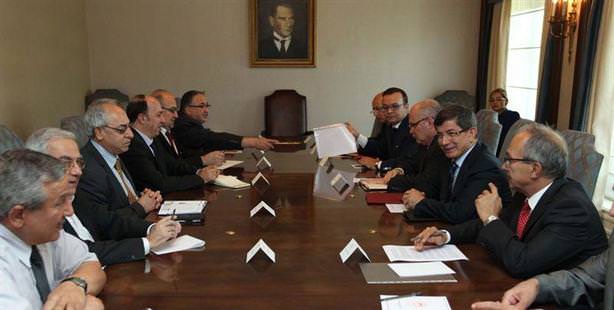 In an effort to ensure the reunifying of the opposition is not solely conducted by the U.S., Foreign Minister Ahmet Davutoğlu held a meeting with the SNC in Ankara ahead of today's crucial meeting in Doha which is anticipated to restructure the Syrian opposition, during which he delivered the message, "Do not disperse, be a part of the wider participation. Be in contact with those within Syria and outside." The meeting came following U.S. Secretary of State Hillary Clinton's statements in which she referred to the SNC as being "ineffective and unauthorized".

Speaking with the SNC delegation led by Abdulbaset Sieda, Davutoğlu ensured that the Syrian National Council will maintain to uphold a significant position in the new structuring of the opposition.
The SNC delegation expressed their discomfort with the United States' Riad Seif Plan which foresees restructuring the opposition under new leadership, while also relaying information on their own efforts to that effect, explaining that most recently, two additional Kurdish groups have joined the SNC.

According to diplomatic sources the SNC requested the meeting during which Davutoğlu reiterated the message, "The Syrian public needs to decide on Syria's future and we will continue our efforts to ensure the Syria public has peace and we will not stop."

It is still unclear precisely which groups will be attending the meeting in Qatar. Following the disintegration of the Kurdish National Council, it is expected that the PKK-affiliated Democratic Union Party (PYD) will be in attendance.

On November 8th, a day after the Syrian opposition meeting comes to a close, Doha will be hosting a meeting of donor nation's foreign affairs ministers. The United States will be represented by Damascus Ambassador Robert Ford.

U.S. Secretary of State Hillary Clinton's recent announcement that the SNC "can no longer be viewed as the visible leader of the opposition" and her suggestion that the opposition needs a new structure, is being viewed as a political statement displaying U.S. intentions to direct the realignment of the opposition, released prior to the November 6th U.S. election.

This is a translation of an article originally written by Durmuş Genç.