No changes for Turkey’s nationalist party 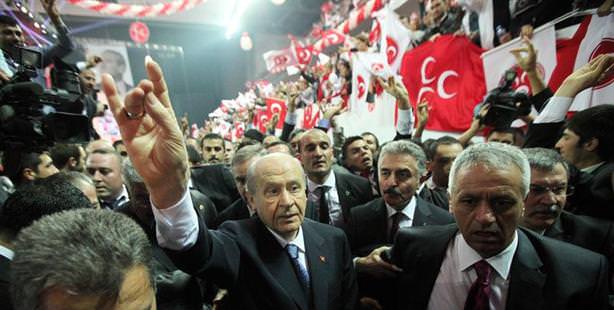 Out of the 1,220 delegates that voted at yesterday's MHP Tenth Ordinary Congress, which was held at the Ankara Arena Sports Center, Bahçeli received the majority 725 votes, followed by Koray Aydın with 441 votes and Müsavat Dervişoğlu with 48 votes. Ankara Deputy Tuğrul Türkeş was elected as MHP Council Chairman.

Addressing the congress, prior to the vote, Bahçeli relayed the following messages:

"If you can recall, in this very same congress hall, the AKP mentality expressed their pride with Barzani. They were nearly going to announce their pride for the PKK and the murderer of İmralı.

We will prove that we can establish the Turkish government without seeking support from across the ocean. The election of a nationalist president, prime minister and speaker of the parliament is not a dream.

Imperialism's lackeys are causing a ruckus through pushing issues such as Kurdish identity, constitutional status, hegemony, federation, education and court defenses in citizens' mother tongues. There is no Kurdish issue in Turkey, there are bids at separatism.

Providing things continue the way they are going, then the murderer of İmralı will first be sentenced to house arrest and then later will be released.

The municipal bill proposed will lead the way to a federation," stated Bahceli.

In his acceptance speech following the vote, Bahçeli went on to state, "Those instigators trying to rear their heads have not obtained their objective. Attempts to carve out our party internally and initiatives to render us ineffective have reaped no results. The traps set up against MHP were for nothing."

CENTRAL EXECUTIVE BOARD BRINGS ON NEARLY HALF NEW MEMBERS