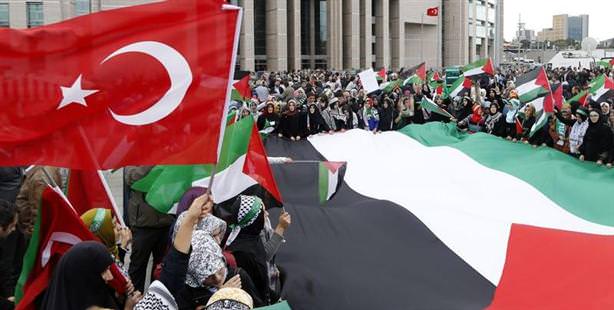 The trial of four Israeli commanders charged for orchestrating a raid on the Mavi Marmara aid flotilla resulting in nine deaths commenced on Tuesday in Istanbul. During yesterday’s hearing a father to one of the victims, a 19-year-old Turkish American not only cried himself, but he brought the whole court room to tears.

The trial on the May 31st, 2010 violent raid by Israeli forces on the "Mavi Marmara" a flotilla which intended to transport humanitarian aid to Gaza began yesterday in Istanbul. Proceedings for the case on the attack in the Mediterranean's international waters, which resulted in nine deaths, are being held at Istanbul's Seventh High Criminal Court.

Suspects Ashknazi, Marom, Yadlin and Levi are being tried in absentia. According to Chief Judge Ümit Kaptan, the notification sent out to the defendants was never received and as a result the court was unable to verify their identification.

During the proceedings, Ahmet Doğan, a professor at Erciyes University and the father of Furkan Doğan the 19 year-old Turkish American peace activist who was killed in the raid, explains that he heard the news of his son's death from his wife's screams. "When we didn't see him get off the plane, I thought that he either fell into the sea, was sent to the United States or may have been detained in Israel. When I went to the Forensics Institute to identify his body, I still refused to consider it a possibility that he was dead. However, the body they showed me there was Furkan's. He had been shot in his forehead, right between the eyebrows and he was smiling." It was at this point during his testimony that Doğan was unable to hold back his tears. Others also began crying in the courtroom.

Furkan's father went on to explain that the autopsy report proves his son was murdered intentionally. "The Israeli commandos saw the red light on his video camera and they began shooting to injure him. Then they went right up to him and intentionally murdered him by shooting at close range."

'THE CASE IS AGAINST ZIONISM'

Speaking in front of the Istanbul Court of Justice, Humanitarian Aid Foundation (İHH) President Bülent Yıldırım pointed out that 37 nations are seeking justice in this trial and stated, "This case is not against Israelis. This is a trial opened against Zionist murderers. This will pave the way for Palestinian cases. The commanders who ordered the Mavi Marmara raid will not even be able to face their own children," stated Yıldırım.

'WE ARE HERE FOR JUSTICE'

Peace activist complainants in the case from Spain, Palestine and Belgium flew out to attend the first hearing. The oldest activist on the ship, 88-year-old Palestinian Hacı İsmail Naşvan stated, "All I want is for Israel to be held accountable and to pay for this."

European Parliament Green Party member Nicole Kill-Nielsen stated, "What matters is that Israel is being tried. This trial will be a source of hope for those Palestinians that are currently serving time in Israeli prisons."

'WE WILL DEFEND OUR OFFICERS'

Israeli Minister of Foreign Affairs Avigdor Lieberman harshly criticized the case against Israeli commanders by calling it a kangaroo court and assuring once again that Israel will not apologize.
Responding to the start of the trial, Foreign Minister Liberman said that the "opening of the kangaroo court against the Israeli military officials in Turkey demonstrates that there is no interest in repairing relations on the part of Turkish authorities."

"Instead of cooperation with Israel to solve problems in our region, the Turkish authorities are creating more unnecessary conflicts and tensions. We have respect for Turkey and its citizens but we will not apologize for fulfilling our duty [by] defending Israeli citizens," he said.

"We will continue to do everything we can to defend the Israeli officials and all of our brave soldiers from 'lawfare,' the new combat used against them," Liberman added.

Israeli Foreign Affairs Spokesman Yigal Palmor also spoke out against the case, stating, ""This is not a trial, this is a show trial with a kangaroo court. This is a trial taken right out of a Kafka novel, a grotesque political show that has nothing to do with law and justice," Palmor stated.

Two giant balloons which read "Israel is being tried" were hung outside of the courthouse, where signs containing the names of the commanders on trial were written along with the words "Wanted 1 Lira".

Protestors who came out to support the trial wrote down slogans on a huge board erected outside of the courthouse.

Singer Murat Göğebakan came out to the Çağlayan Courthouse in a show of support.

There were Arabic, English, Hebrew, French, Spanish and Greek translators on hand during the hearing.

The suspects were represented by attorneys provided by the Istanbul Bar Association.