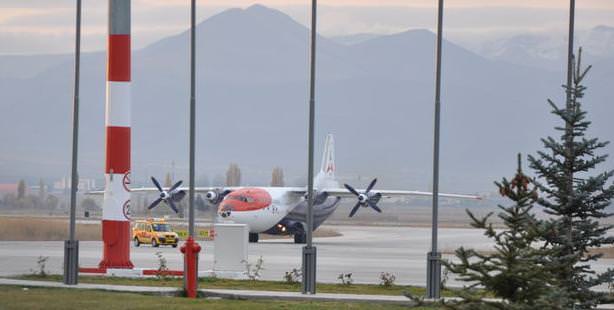 Turkey ordered an Armenian aircraft flying to Syria and carrying humanitarian aid to land in Erzurum in order to search the plane’s cargo for military supplies.

The Antonov AN 12 cargo plane was forced to land in the eastern Turkish province of Erzurum at 06:12 am local time on Thursday. Armenian officials and the plane's pilots claim the aircraft is transporting humanitarian aid. Turkish security forces are currently investigating the plane for the presence of any arms or military supplies.

This is the second time an Armenian plane has been ordered to land as part of Turkey's efforts to prevent its airspace being used to supply the Syrian military. In mid-October another Armenian plane was allowed to continue its journey after confirmation it was carrying humanitarian aid as stated.

FIRST ANNOUNCEMENT MADE BY FOREIGN MINISTRY

Turkey's Ministry of Foreign Affairs has released an announcement stating that an Armenian Airlines cargo plane which was using Turkey's airfield to fly to Syria has been grounded and is being inspected by Turkish security forces.

Foreign Ministry officials say the plane, declared to be carrying humanitarian aid, was headed for Aleppo. "The plane's route was approved on the basis that it would make a technical landing en route in Istanbul. The plane departed knowing that it would be grounded as previously agreed. The plane is being inspected presently."

Turkey has become increasingly assertive in challenging Syrian President Bashar al-Assad amid growing tensions along the border. It banned Syrian aircraft from its airspace in October after saying it found Russian munitions believed to be destined for Syria's armed forces on board a Syrian plane.