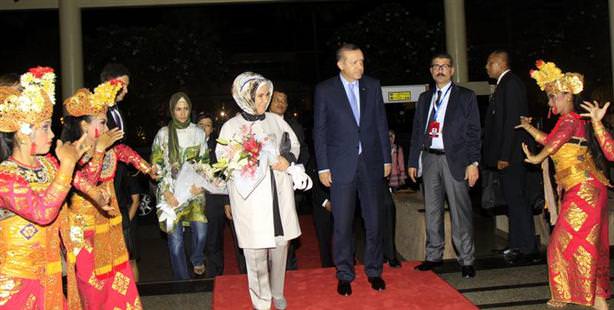 Congratulating Obama for his reelection from Indonesia, Erdoğan said, “We have experienced an era with Obama where our strategic relations have risen to a model partnership. We are now experiencing the golden age of joint relations.”

Prime Minister Tayyip Erdoğan commented on U.S. President Barack Obama's reelection by stating, "We have experienced an era with Obama where our strategic relations have risen to a model partnership. Because we know one another so well, we can now take positive steps together. I want to define this era we are entering as being the 'golden age' of relations," stated the prime minister.


Arriving to Bali, Indonesia accompanied by his wife Emine Erdoğan and daughter Sümeyye Erdoğan in order to participate in the Bali Democracy Forum; Prime Minister Erdoğan was greeted by a performance of traditional dances from Indonesia at the entrance of their hotel. Speaking at a press conference from Bali, Erdoğan stated the following:

"During our four year working friendship with Obama, we have worked together on common global policies. This has not just been regarding world politics; we have also worked intensely together on issues in the region. We have experienced an era with Obama where our strategic relations have risen to a model partnership. I want to offer my congratulations from both myself personally as well as from my nation.

The two candidates' line of conduct in the presidential race in America is worthy of praise. We have sent a message of congratulations to Obama and I have also sent a congratulatery telegraph to Vice-President Joe Biden.

From here on out, we will continue to try to improve our relations, which are already defined as advanced, to an even further level. I want to define this era as a golden age in relations. I believe that because we are that much more familiar with one another, we will now be able to take better well-timed and productive steps.

I will be calling Obama on Thursday, When I return to Turkey I am hoping to have a further encompassing telephone discussion. Right now, they are still overcoming the exhaustion of a serious election campaign.

It would be wrong to say that everyone's mind was not locked in on the U.S. elections. There are expectations of positive developments in the region following the U.S. election. We have these expectations as well. We did not press the U.S. too much based on the consideration that the American elections and campaign would have been exhausting and an obstacle.

The difficulties experienced between the permanent members of the UN Security Council are being reflected in general. I believe that different steps need to be taken to change the attitude of Russia and China. Telephone diplomacy is ongoing. Putin will be paying a visit in the upcoming month and we continue to discuss the issue with China.

The situation in Syria has reached extremely severe levels in recent weeks and days. The number of Syrian refugees in Turkey has reached 111,000. We provide all of the logistical support we can and will continue to do so. We cannot send back people to their death after that is what they have already escaped. We have to take care of them. We believe that the more time passes, the more the groundwork is being laid to abandon the innocent civilians in Syria to their death. Efforts with President Obama will be to expedite the issue and to especially mobilize the process through the UN's permanent member nations. When I return to Turkey, hopefully I will have the opportunity to discuss these issues with the U.S. president, either over the phone or in person.

Our current stance following the Geneva discussions is to reach a solution without Assad. Syria rejects from the start any sort of solution without Assad. Yet it would probably most likely be impossible for anyone to still consider someone who has killed this many people and forced others to emigrate abroad and leave their own homes to act as leader. To be honest, it would not be right for us to accept this."