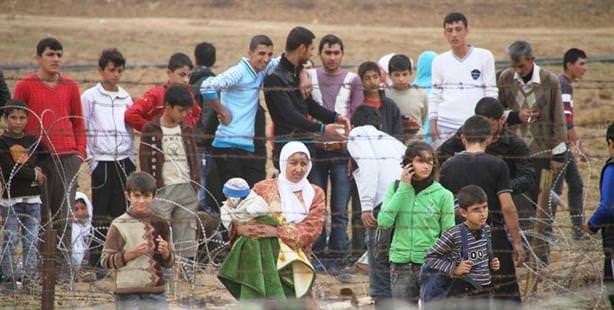 Syrian refugees escaping the violence in the Syrian district of Resulayn due to the ongoing conflict between the Assad regime’s forces and the opposition are being forced to wait at the border.

Thousands of Syrians fled their country on Friday in one of the biggest refugee exoduses of the 20-month civil war after rebels seized the border town. The U.N. said 11,000 refugees had fled in 24 hours, mostly to Turkey. The influx caused alarm in Ankara, which is worried about its ability to cope with such large numbers and has pushed hard, so far without success, for a buffer zone to be set up inside Syria where refugees could be housed. With capacity in Turkey's refugee camps filled, Turkey had to make the difficult decision to have Syrian refugees wait along the border.

From the early morning hours on Saturday, Syrians have been arriving to the Turkish border and some with children. The numbers built-up to approximately 150 Syrian refugees who were stuck waiting at the border near Şenyurt to enter Turkey. While they await permission from Turkish authorities, at present only Turkish nationals with passports to prove it are being allowed to cross over the border.

Arriving to the border to inspect the spot in Şenyurt where Syrian refugees are attempting to cross over the border, Mardin Assistant Governor Müfit Gültekin visited both Red Crescent officials and Syrian refugees who were waiting along the border. "The decision has been made at present to hold the refugees on the other side of the border due to the fact that the quotas at the refugee camps in Turkey are currently all full. Unless otherwise obliged we will be keeping them on the other side of the border. That is the order we have been given and we are assessing the situation at the moment.

We are operating according to the orders of Turkey's Prime Ministry Disaster and Emergency Management Presidency. This number may increase. It all depends on the situation on the other side. However, at this point we cannot accept anyone else. We are only allowing in citizens with Turkish passports that will be staying with their relatives."