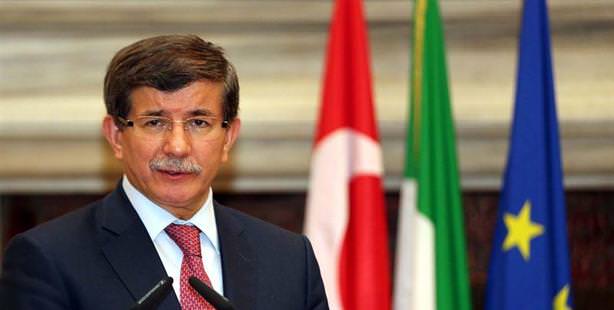 Foreign Affairs Minister Davutoğlu has announced that Turkey has sent Syria a second diplomatic note in response to the recent developments in Ceylanpınar.

Speaking from Italy where he is attending the Ninth Turkish-Italian Forum, Ahmet Davutoğlu announced during a joint press conference with his Italian counterpart Giulio Terzi, "We have sent a diplomatic note to the Syrian regime and informed the U.N. Security Council and NATO of the situation."

Syrian warplanes tore along the Turkish frontier on Monday and bombed the rebel-held town of Rasulayn just meters from the Turkish town of Ceylanpınar. Ankara says it has fired back in retaliation for stray gunfire and mortar rounds landing on Turkish soil and has deployed F-16's to patrol the border air field for Syrian violations.

"WE HAVE GIVEN SYRIA A DIPLOMATIC NOTE"

Discussing the current situation in Ceylanpınar during a joint press conference held with Italian Foreign Affairs Minister Giulio Terzi at Sant'Agata, Davutoğlu stated, "We have presented Syria with a diplomatic note. We have also informed the U.N. Security Council and NATO of the situation." Davutoğlu went on to state that the fact that the international community remains indifferent is damaging to the human conscience.

"The Assad regime holds the number one responsibility for what is happening. The secondary responsibility sits with the U.N. Security Council for their inaction. As long as this inaction persists, the Syria regime will continue to disguise their provocations."

Stating that the bombing by Syrian jets in residential areas without differentiating between civilians and militants is unacceptable, Davutoğlu went on to clarify that Syrian jets did not violate Turkish airspace. "If they had, we would have responded," stated the Foreign Minister.

Mentioning that as of yesterday the Syrian opposition has reached a common alliance with representatives from every opposition faction, Davutoğlu called on the international community by saying it is now their turn to do what befalls them.