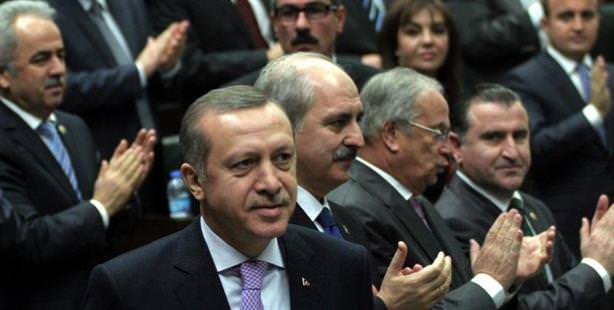 Prime Minister Recep Tayyip Erdoğan addressed parliamentarians at an AK Party Group meeting on Tuesday, during which he referred to Israeli actions as terrorism and ethnic cleansing.

The following are a number of excerpts from Erdoğan's emotional delivery addressing the devastating situation in Gaza.

"The world needs to understand, see and put forth their conscience to truly think about this issue. Israel is committing ethnic cleansing by ignoring peace in this region and violating international law. I am voicing out to the entire West, no one can say that Israel is using their right to defense. Israel is terrorizing the Middle East.

The United Nations has made a number of decisions; however they have yet to implement any form of sanctions. That is why I say that I don't believe in the U.N.'s justice. Out of the five permanent members in the U.N., two have differing views when it comes to Syria and Israel. Take one and shoot the other, where is your justice? There are 115 dead amongst our brothers in Gaza. Dominant powers, where is your justice? Are we just supposed to watch from the stands because certain people are doing this? There are three paths we can take; we either intervene with our own hands, our own words, or our own hearts. The United States especially says they want a two-state solution, well where are these two-states?

The Gulf nations, Qatar, Saudi Arabia, we all need to join hands. Today for them and tomorrow for us… If we are going to die, then let's die like men. Let's do this. There cannot be justice this way. I am calling out to human rights organizations, do you only consider atheists and other belief groups. Why don't you see the child held in the arms of my brother İsmail Haniyeh? You come to Turkey to follow the PKK. Why aren't you in Gaza? Is killing children and the elderly part of your legitimate right to self defense?

Ever since 2008, Gaza has been completely besieged. It has been transformed into an open-air prison. When Hamas won the elections in Palestine, the West cut all the funds previously provided for the election. People are being ruthlessly killed in Gaza. Unfortunately, since 1948, the U.N. and Western states have ignored all of Israel's illegal attacks.

Ariel Sharon's son writes in his column that they should do to Gaza what was done to Hiroshima and Nagazaki. His father had already said the same to me. When I visited Israel, Ariel Sharon had stated to me that his biggest joy was standing on top of tanks. How can you say this to me, isn't that out of place, I had asked him to explain this during a press conference. He wasn't able to. I want to file a criminal complaint against this man and I invite the prosecutors in my nation to take on the job. Nevermind defending their own bloody politics, Israel isn't even able to make excuses anymore. The international community needs to heed the words spoken by regional nations. As long as a solution to the Palestinian issue has not been reached, there will always be blood and tears in this region as well as in the entire world.

Even if everyone else turns their back, we will not turn our backs on our Palestinian brothers. I was very pleased to see this same sentiment present in Egypt as well as in Qatar. Today a number of foreign ministers from Arab League nations are headed to Gaza. Our Foreign Affairs Minister Ahmet Davutoğlu is also amongst the delegation.

Sooner or later Israel will have to pay the price for killing that nine-month old baby and that 81 year-old grandmother and for all of those they have killed up until now."