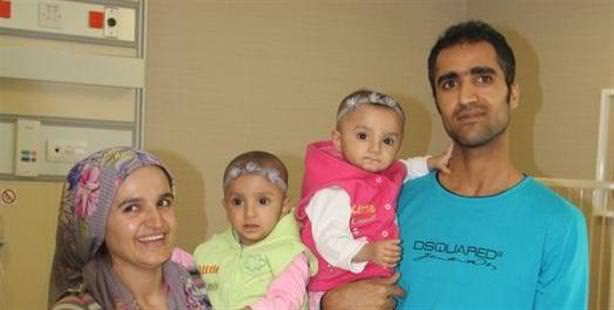 Maternal twins Ceylin and Ercin, who were born with liver cancer and brought to the world in Şanliurfa, have become the successful recipients of liver transplants by their mother and father in simultaneous operations conducted by doctors in Turkey.

Two female maternal twins, who were born with liver cancer, have received liver transplants in simultaneous operations conducted by Turkish doctors. At 13 months of age and just seven kilos in weight, the Ceylin and Ecrin twin sisters are now surviving with half of their mother's and father's livers in two simultaneous operations that have gone down in medical literature as a world first.

Ceylin ve Ecrin were born in Şanlıurfa to the 26 year-old Rabia and 29 year-old Mehmet couple. They also have a seven year-old brother named Cihan. The twins appeared to be healthy when they were brought to the world after what was stated to be a very easy pregnancy. However, at just five months of age Ecrin's stomach all of a sudden began swelling, and she was constantly crying.

The Fırat family sought assistance at the Harran University Medical School. The test results were startling, as they showed the tiny infant had an 11centimeter-wide tumor. All of the results pointed to the assumption the baby had been born with cancer.

Doctors at Harran Hospital decided to send this unique case to the capital. Joined by her mother and father, Ecrin was sent to the Sami Us Research hospital in Ankara. Her sister Ceylin remained with her brother in Urfa where they stayed with relatives. However, doctors suspected Ercin's maternal twin sister Ceylin may also have liver cancer and unfortunately, they were right. Despite not yet exhibiting any signs of illness, Ceylin also had a similar mass in her liver. The odds were not good for an organ transplant on an infant weighing less than ten kilograms. The twins were started on chemotherapy and were forced to undergo seven difficult sessions until they gained enough weight for the operation. There still remained the risk the cancer could spread to other organs.

Prof. Dr. Koray Acarlı from Memorial Hospital and Münci Kalayoğlu an internationally acclaimed transplant doctor, were the advisors on the case. They set out to clean out the cancer which had spread to various areas of the liver through conducting a liver transplant.

The Fırat family and their daughters were immediately invited to the Okmeydanı Memorial Hospital in Istanbul. Both the mother and father were candidates for the babies' transplants, however due to the special circumstances the operations needed to be conducted simultaneously. All the necessary preparations were made, the operating rooms prepared and the operating teams were divided in two. The surgeries were extremely successful and now the Ceylin and Ecrin twins are both healthy and doing well with the start of their new lives granted to them by their very own mother and father.

'There is no duplicate surgery in the world'

Prof. Dr. Münci Kalayoğlu: "We conducted two organ transplant operations simultaneously. Because the babies are maternal twins, we received organ donations from both their mother and their father. There is no duplicate of this surgery in the world… We would have actually preferred to do a transplant from a cadaver; however people tend to not even consider the option of donating their children's organs. Whereas, these children (transplant recipients) are given the gift of a whole new life.

Prof. Dr. Koray Acarlı: Even surgeons were unaware that a liver transplant could be conducted on babies this small. We have actually done a transplant on a 4.5 kilo infant before. To be born with liver cancer is an extremely unique situation and for these children even a transplant does not necessarily mean they will be healed entirely from the disease.

This is a translation of an article originally written by Esra Tüzün.