Spain should be an example, politics and terrorism must be separated 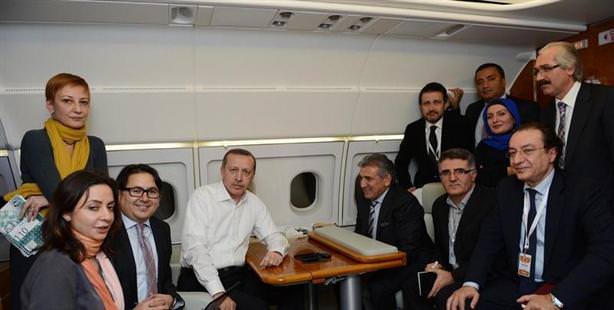 Pointing out that in Spain’s fight against ETA they made those who terrorized politics resign, Erdoğan stated that if the PKK didn’t exert armed pressure, then the BDP would not receive the votes.

Speaking to journalists while returning from Spain, Prime Minister Tayyip Erdoğan responded to a series of pressing questions on the agenda.

Erdoğan commented on the recent immunity debate by stating that if the PKK didn't exert armed pressure, the BDP would not get the votes because, "they have no base line," and pointed to Spain as an example. "Spain made those who terrorized politics resign from conducting politics.

Erdoğan also commented on the situation in Syria and Turkey's possible switch to a presidential system while delivering the following messages:

Have there been reactions to your statement directed at the PKK, when you said that if they drop their weapons they will go away?

"This is nothing new. There may be some that drop their weapons and decide to do something different. It all depends where the reactions will come from. We are used to this now. We say what we think. It is not enough for the weapons to be silenced; they need to be dropped entirely. If attacks continue, our operations will also continue in the same manner."

In the previous initiative to deal with the PKK, negotiations were held in a third-party country. With the end of the hunger strike, will a new process be started? Have we reached a new point?

"Let's not deviate. I don't say something different in the morning and then something else at night like others. We will not budge an inch when it comes to our national unity and brotherhood project. However, as for the İmralı (a reference to the PKK leader Abdullah Öcalan) situation, we as politicians will never engage in dialogue. Our intelligence organization may hold deliberations in an effort to put an end to terrorist events. I would never go and let a delegate deliberate with a terrorist. This was done in the past and delegates went all the way to Bekaa. I will not deliberate with anyone who hugs and embraces terrorists nor would I find it favorable for my colleagues to speak with them. My colleagues and justice minister have spoken with those who were not at all involved with the violence; however they have never yet kept the promises made."

What will happen regarding the immunity issue?

"I spoke with Mariano Rajoy, the Spanish prime minister who took over for Zapatero, and asked about what they did in Basque. He said, 'We openly made them drop their weapons and pulled them out of politics. We saw that they weren't conducting politics in a way that was befitting (just like our situation) and so we pulled them from politics and made them drop their weapons.' He says everything is working out now and it will come to an end. Basque received a lot of outside support. The IRA, the Basque and ETA are nothing like the terrorists in Turkey. First of all the numbers aren't even the same. They are extremely different even though the media regularly refers to them as if they weren't.

Like the situation in Spain, we will stand in the way of those who terrorize politics. However, those who conduct politics as it should be will be applauded by everyone. Let me just say this, if the PKK didn't use armed force, the BDP would not get votes, because they have no baseline. They receive votes by threatening villages. They say if they don't receive sufficient votes they will kill."

THE KEY IS IN RUSSIA'S HAND

There was a heavy bombardment in Idlib. Do you think there is any way to put an end to this massacre through international law?

Is the United States' stance satisfactory?

"The U.S. has not shown a satisfactory stance thus far. However, there was a recent election and they say a new cabinet may be established. There is also speculation Ms. Clinton may be departing. These uncertainties need to be eradicated first."

Recently, western nations have been talking about radical movements within the Syrian opposition…

"This is ridiculous. There is a new coalition in Syria now. A number of countries in the West have accepted this coalition. The opposition forces have received support, which has allowed them to successfully continue this struggle despite the impossible situation. If the opposition succeeds, there will be no such thing as Al Qaeda remaining."

THE UN AND PALESTINE

Are you hopeful regarding the November 29th vote on the Palestinian resolution in the U.N.?

"We are doing all that we can. We have sent Mr. Ahmet (Davutoğlu). If they receive the support they did last year, that would be great, but if they don't there could be problems. It is as if there is a division within the EU. Spain sent out a positive signal. An additional seven to eight countries said they would support the resolution. If they do so then maybe the numbers will see some action.

We do not approach this situation from our own perspective. We feel that the United Nations should represent all continents and religious beliefs. There are others who support our beliefs; however this is also a world where those who are afraid take precedence. I spoke to one of the nations that voted affirmatively they are now acting noncommittal. This will pose problems for our relationship with them. I said, 'you will disappoint us. Why have you changed your mind this year?' I guess they were pressured somehow."

There is widespread criticism of the presidential system…

" In America, the president can't even appoint an ambassador or decide on the sale of a helicopter. Therefore, we need to create a Turkish-style presidential system. The systems in place in Russia and in the U.S. could be the right choice. We could also discuss having two legislative bodies with the Senate on one side and the House of Representatives on the other. I personally would prefer a single legislative system."

Why do you propose a single legislative system?

"It takes longer to make a decision there. We already have the parliament, and they are the ones that supervise. Having numerous supervisors makes for a cumbersome system. We need to be more practical and go straight for reaping results.

From this perspective I feel a unitary system is better-timed. We are in a single legislative already, when the assembly goes to a vote there isn't a single person from the opposition. Meanwhile, they want a censure motion and when it goes to a vote they have a total 150 votes but they only come out with 49. It isn't sincere and it certainly isn't democratic."

This is a translation of an article originally written by Süleyman Yaşar.