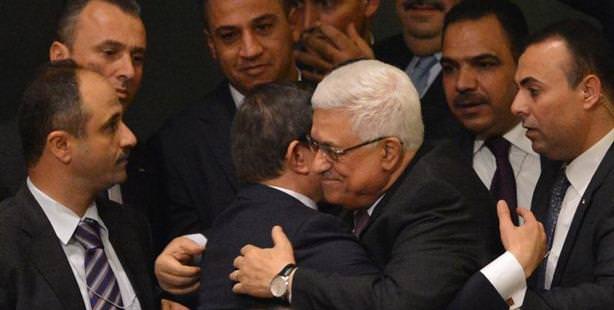 Foreign Minister Davutoğlu played a key role in Thursday’s vote to upgrade Palestine’s U.N. status to observer state. Not only did he conduct telephone diplomacy in order to convince those nations that were still on the fence, but he was also the sole foreign affairs minister from a Middle Eastern nation to participate in the vote.

Foreign Affairs Minister Ahmet Davutoğlu and Palestinian President Mahmoud Abbas conducted a series of diplomatic telephone calls prior to yesterday's U.N. vote with countries that were yet undecided on whether Palestine should be upgraded to observer state status. After the victory was won, the duo went on to celebrate at Türkevi.

193 NATIONS DISCUSSED ONE BY ONE

Ahmet Davutoğlu, who was the sole foreign Affairs Minister to attend the session from a Middle Eastern nation, cancelled his entire schedule the moment Palestine's application to the U.N. General Assembly was confirmed and headed straight for New York.

On Thursday, Davutoğlu met with U.N.-Arab League Special Envoy to Syria Lakhdar Brahimi to discuss the latest developments in Syria. Later, Davutoğlu honed in entirely on the impending vote as he was briefed by his team on the stances embraced by every single nation of the U.N.'s total 193 member-states.

On Wednesday, Davutoğlu met with Palestinian President Mahmoud Abbas at 13:30 to divide up between them the nation's who were undecided in order to conduct telephone diplomacy to discuss the vote. On the morning of the resolution vote, Davutoğlu attended a Palestinian rights committee meeting where he reiterated Turkey's full support.

While listening to the address made at the U.N. General Assembly prior to the vote, Foreign Minister departed the hall when the Israeli representative began to speak and instead went to congratulate Mahmoud Abbas backstage.

'SHUTTING OUR EYES NEEDS TO END'

Returning to the hall after the Israeli representative's speech, Davutoğlu also delivered an address that received the greatest applause following Mahmoud Abbas' delivery. "For 60 years the whole world has shut their eyes to the plight of the Palestinian people… The flag of Palestine, Ladies and Gentlemen, should rise in this Assembly next to ours," stated Davutoğlu.

Following the passing of the resolution, Davutoğlu attended the celebrations held in the U.N. General Assembly lobby and later joined Mahmoud Abbas and his accompanying committee for another celebration, the first held outside of the U.N., which took place at the New York Türkevi, also located in Turkey's UN Permanent Representation and Consulate General building.

Davutoğlu extended an invited Abbas to the pulpit as the leader of a sovereign state in an international platform. Abbas thanked Turkey as well as offered direct thanks to Prime Minister Erdoğan and Foreign Minister Davutoğlu. Also attending the celebrations held at Türkevi was Malaak Shabazz, the daughter of Malcolm X, well-known for being a leader of the struggle for Muslim and African-American rights.

DAVUTOĞLU: THE U.S. VOTE DISAPPOINTED US

Speaking to Turkish journalists following the UN vote, Foreign Affairs Minister Ahmet Davutoğlu, stated that Palestine's "observer state" status means that the fact that Israel is occupying Palestinian territories can no longer be disregarded. "Those who do not want Palestine to exercise their right to apply to the ICC should now turn to Israel and say, 'stop these settlements and then Palestine will not take this route'."

Ahmet Davutoğlu was welcomed with displays of love by a group of Palestinians upon his arrival to Turkey, during which he stated, "Palestine is now a state." Davutoğlu went on to say, "The fact that the United States chose to be a part of the very small minority in the vote has saddened us. We hope that they will now reassess this new situation. Israel needs to think about why 138 member-nations voted against them and why 41 chose to abstain. I hope the necessary lessons will be learned from this ruling and the pressure exerted on the Palestinian public will come to an end," stated Davutoğlu.

THE U.S. SAYS 'ISRAEL' ONCE AGAIN

While the international community overwhelmingly voted in support of Palestine, the United States made no concessions on their support for Israel. Speaking at the General Assembly, U.N. Permanent Representative Susan Rice, who is also looked favorably upon as a potential replacement for Clinton as U.S. Secretary of State, stated that upgrading Palestine to non-member observer state status would pose a great obstacle to peace.

Meanwhile, reactions against Palestine gaining state status also surfaced in the U.S. Congress, with certain members inferring that Palestine's stance be retaliated with the cutting of funds for Palestinian aid from the U.S. budget.

WHAT DOES IT MEAN FOR PALESTINE?

For Palestine to achieve observer state status, means the chance of becoming a full U.N. member has increased.

Palestine's sovereignty has been officially accepted. This means that Israel will fall into the position of "occupiers" of the West Bank.

The Palestinian administration will be able to apply to the International Criminal Court for war crimes committed by Israel.

There were no Arab ministers present…

Prof. Dr. Mensur Akgün: With this ruling, Palestine is well on its way to becoming a state. This will exert significant pressure on Israel. The international community has recognized the Palestinian cause. The fact that 138 nations voted yes is a significant parameter. It is incomprehensible that England, which abstained, voted on the condition that Palestine would not apply to the ICC. Turkey's role in this process was important. There wasn't a single Arab foreign minister present, however Ahmet Davutoğlu was there.

Prof. Dr. Doğu Ergil: The recent conflict has resulted in creating an emotional air in favor of the Palestinians. It should be considered a victory for Palestine to acquire this U.N. status. This has opened the door to Palestine being considered a partial state. In addition the road to full membership is now wide open. The rights to live, which were granted to Israel, has now finally, a half a century later, been granted to the Palestinian Arabs. Turkey's efforts and contribution to this process cannot be overlooked.