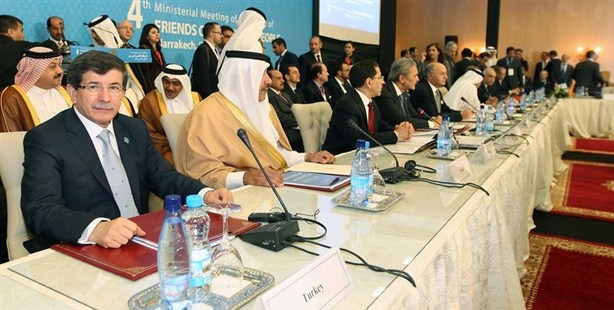 Foreign Affairs Minister Davutoğlu has stated that U.N. Special Envoy to Syria Brahimi’s initiatives would be the last, adding that Assad is now seeking an escape route.

Foreign Affairs Minister Ahmet Davutoğlu recently remarked that it was about time U.N. Special envoy Lakhdar Brahimi put an end to his efforts as the international mediator presents a fifth initiative aimed at persuading Bashar al-Assad.

Davutoğlu has shown special Syria envoy Brahimi a 'red card'. Speaking from Morocco where he participated in the fourth meeting of the Friends of the Syrian People Group, Davutoğlu had the following to say on the issue of thwarted attempts, which he says should be the end of efforts to sway Assad:

"We are all responsible for any hour or even minute lost. We now need to act according to a timeframe. First there were bipartite meetings that lasted for nine to ten months, followed by the Arab League, the Russian initiative and then later Annan and Brahimi.

After all of these initiatives, the Syrian public wants to see the light at the end of the tunnel. If we do not proceed with a timeframe, then we must take on a position of considering certain sanctions. The Syrian public has no more patience for a new open-ended exercise of diplomacy that could take months. This is the last chance. From here on out there is no way we can begin yet another initiative," stated Davutoğlu.

Davutoğlu also requested the U.N. create an aid corridor for the two million Syrians whom have been displaced from their homes. The issue of providing aid was one of the main matters discussed by the 115 nation representatives meeting in Morocco. A UN ruling will be awaited for the distribution on aid to be conducted through local committees. If this doesn't work, then the new objective is to establish an aid corridor that would span all the way Damascus. Davutoğlu has discussed this formula during meetings with members of the Russian administration.

Expressing that they would like Russia to participate in the ongoing Turkey-Egypt and Iran deliberations, Davutoğlu stated, "Russian President Putin has said, 'we are working on new and creative ideas.' These are expressions that show Russia is seeking a way out." According to the latest news to reach Ankara, oppositionists have nearly taken over the Damascus Airport. Meanwhile, an individual close to Assad has gone to Ecuador, Brazil and Argentina in order to lay an escape plan on the table. According to the latest information, Assad is expected to escape to Ecuador.