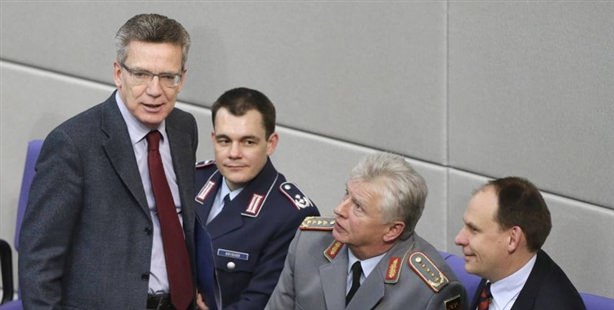 The Bundestag, Germany's lower house of parliament approved on Friday the sending of two Patriot batteries and 400 soldiers to Turkey as part of a NATO plan to protect the country from any offshoots of the Syrian conflict.

Out of 555 lawmakers, 461 voted in favor of deploying the Patriot air and missile defense system to Turkey's border with Syria. The ruling also includes the use of Awacs.

The Bundestag has officially approved the stationing of Patriot missile defense systems in Turkey, which applied to NATO in November for the assistance. Turkey, a NATO member which has taken in over 130,000 Syrian refugees, says it needs the surface-to-air defense batteries to shoot down any missiles that might be fired across its border. Chancellor Angela Merkel's centre-right coalition agreed to Turkey's request last week but needed the approval of the Bundestag for the deployment to go ahead. The voting, participated in by 555 parliamentarians took place Friday in the Bundestag. Lawmakers approved the help by 461 votes for and 86 against, while eight abstained.

Prior to the voting, the Left Party Assembly Group expressed that they were against the ruling, while all other parliament groups vowed their support for the aid. In the end, Germany officially passed the ruling on Friday which will allow the stationing of two Patriot missile and air defense systems and 400 German soldiers. The ruling also includes permitting the use of Awacs, early-recognition reconnaissance aircraft.

Minister of State at Germany's Federal Foreign Office, Michael Link stated on Thursday, "The Patriot systems will most likely be stationed near the city of Kahramanmaraş. Therefore, as the motion dictates, it will be ensured that the Patriots will not affect the Syrian air zone."

Christian Democratic Union (CDU) MP Philipp Missfelder says it is completely natural that NATO would respond positively to its partner Turkey's request for the Patriot air defense system. Missfelder drew on the example of Germany benefitting from NATO during the Cold War era and how NATO offered protection as well as contributed to the unification of a divided Germany and therefore, it is completely normal for NATO to want to assist a member nation.

Missfelder went on to state that Turkey has done great work when it comes to Syria, it has acted with restraint and has not escalated tension in the region. "Turkey is an important strategic partner and friend nation for us. Without Turkey, we cannot reach a solution to the situation in Syria," stated MP Missfelder.
Kerstin Müller from the Green Party said that all concerns surrounding the deployment have been rectified however underlined the importance of not dragging in German soldiers to the civil war in Syria.

Left Party Bundestag Co-Chair Gregor Gysi stated that by sending soldiers to the Middle East, the German government will have officially taken sides in the conflict.

Speaking after the Bundestag ruling, German Foreign Minister Guido Westerwelle emphasized that the deployment of the Patriot system to Turkey would solely be for defensive purposes, and stated, "It is normal for us to protect our partner and ally Turkey from external threats within the NATO framework."