Her best customer is Al Maktoum 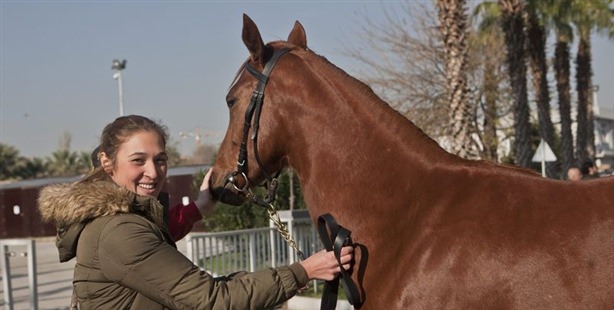 A total 330 horses found new owners at a colt sale held at the Veliefendi racing grounds. Eight horses bred by 26-year-old stud farm owner Pınar Aracı drew particular attention at the annual autumn colt sale. Aracı shared that she has made a 15 million dollar investment in horse breeding, and said, "I sold five of my horses to Dubai Sheikh Al Maktoum for 525,000 sterling.”

This year's three-day long "Autumn Horse Sale" held annually by the Turkish Race Horse Breeding and Owners Association (TYAYSD) drew wide interest. Hosted at the Istanbul Veliefendi Hippodrome Sales Center, the sale brought 330 horses together with new owners. There were eight horses that especially stood out, bred by 26-year-old breeder Pınar Aracı, who has a horse farm in İzmit.

Aracı, who says, "Dubai Sheikh Mohammed bin Rashid Al Maktoum and his wife buy the horses I train on my farm in İzmit," chose to stay with her horses that were brought on display in the paddock

SHE LEARNED THE BUSINESS FROM HER FATHER

The auction-style sale had horse-lovers in a cut-throat price raising bid to purchase the horses on debut in the ring. Colts, starting from 15,000 and selling at up to 150,000 found owners. There was also an increased interest by women at this year's horse sale which saw excitement peak as sale after sale transpired.

Pınar Aracı, who owns a large stud farm in İzmit has made a 15 million dollar (27 million TL) investment in horse breeding. Aracı went abroad to study Agricultural Administration, and is now pursuing the horse-breeding business she acquired from her father.

Aracı explains that she grew up surrounded by horses throughout her childhood. "A horse is born and you give them painstaking care until they are a year and a half. Simply the mating of a mare and a stud for the mare to become pregnant costs us 60,000 lira. When you add their food and care, the price of a horse is over 80,000 liras. How could I sell such a dignified horse at this price? I could never do it at this price. If they don't sell, then when they are two years old I will begin their training and they could race," she says with confidence.

Aracı says she has also participated in horse sales abroad. "Because I am a women and my age is young they think they can persuade me so they can by my horses cheaper, however I am an old hand at this.

Furthermore, those that come to buy horses in Turkey are not very knowledgeable on the matter. Not a single person has asked me about my horses' veterinary check-ups. They just look. However you don't by a horse just by looking at it," states Aracı. Explaining that at last year's sale in England, the five horses she bred especially for Al Maktoum sold for 525,000 sterling (1.5 million TL), Aracı says, "Maktoum knows what he wants."

Performer Faruk Tınaz was another participant in the horse sale. Tınaz says he had 15 first place wins from his five racehorses. The performer brought three horses to sell and explains, "The horse I put up for sale reached a bid of 70,000 lira, but I didn't sell. I won't sell at that price."