Turkey to become a force in space 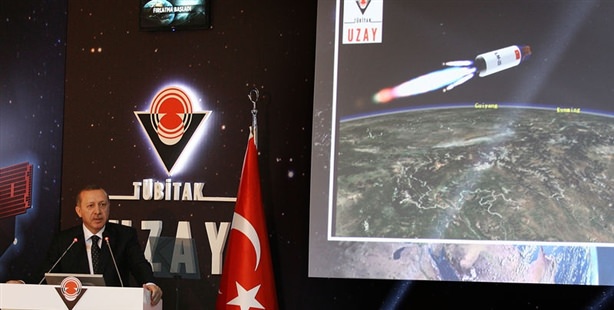 Turkey’s first earth observation satellite, which will be used for both military and intelligence purposes, the Göktürk- 2 was launched yesterday at 18:12 Turkish time from China. A launching ceremony was held in Ankara where the satellite’s take-off was broadcasted live. Speaking at the ceremony, Prime Minister Erdoğan stated, “Today, we are all experiencing this historical moment for Turkey, for our nation, together.”

Göktürk-2, the country's first domestic, high-resolution observation satellite, which was developed using national resources by the Space Technologies Research Institute (Uzay) Scientific and Technical Research Council of Turkey (TÜBİTAK) and the Turkish Aerospace Industry Corp (TUSAŞ İş Ortaklığı) in a project which first began in 2007, was officially launched into space yesterday. Göktürk-2 was launched from the Jiuquan Satellite Launch Center in Gansu, China on Tuesday at 00:13 local time and 18:12 in Turkey.

Prime Minister Recep Tayyip Erdoğan was amongst the officials attending the launch ceremony held at the TÜBİTAK- Uzay base in Ankara's Middle East Technical University. Announcing that Turkey is now one of the world's 25 nations that have the capacity to build their own satellite, Prime Minister Erdoğan was delivering an address as the information came in that the satellite had reached its 686 kilometer trajectory by 18:25. Speaking at the launch ceremony, Prime Minister Erdoğan relayed the following messages:

AN ASPIRING TURKEY: "Today, we are all experiencing together this historical moment for Turkey and for our people. Turkey has launched a satellite in the past; however the Göktürk-2 satellite we are launching today is concrete proof that we are now a nation with serious aspirations."

NEW OBJECTIVE TO BUILD LAUNCH STATION: "There are only 11 nations in the world that have the facilities to launch satellites. We are going to mobilize our capabilities and our institutions efforts in order to become a nation with its own launch center. What is even more important is the fact that the Göktürk-2 satellite, which we have now launched into space, will be the most significant indicator of just how far Turkey can go with determination and self-confidence. As a nation and a country we said we could do it and we did it. We had a dream and we turned that dream into a plan and then a project."

OBSERVATION AND EXPLORATION: "May the Göktürk-2 satellite, be fruitful and fortunate for our country and nation. The fact that 80 percent of the satellite was domestically produced is a whole other source of pride. I want to congratulate everyone who has worked on this project. Last year we launched our first domestic satellite 'Rasat' from Russia. The Rasat has been performing successfully for over a year now. It has delivered imagery for a wide vicinity. The Göktürk satellite however, has more advanced capabilities."

Turkey's Grand National Assembly Speaker Cemil Çiçek, Chief of General Staff Necdet Özel and a number of ministers came out to witness the launch. Meanwhile, police had to intervene in a demonstration by a group of students protesting Prime Minister Erdoğan outside the TÜBİTAK facilities on the METU campus.

The Göktürk-2 satellite will fulfill Turkey's wide range of observation needs spanning from city planning and urban development, surveying forestation and deforestation, detecting illegal construction sites and in natural disasters such as in determining building safety for damaged and demolished buildings in the case of an earthquake.

The Göktürk-2, which cost 140 million TL, will be able to provide up to 2.5 meters resolution for the Turkish Armed Forces reconnaissance and observation needs. The satellite has a life span of five years and has the capacity to display a 640 km band stretch. The satellite operates in three axes which allow the capability to observe any point desired throughout the world. More importantly, the Göktürk-2 satellite allows the possibility of obtaining imagery from all over the world for intelligence purposes.

Three separate TÜBİTAK Uzay teams will be stationed in four different land stations, operating in coordination in three different cities in the world. The initial imagery is anticipated to be received between December 26th and 31st. The first signal was received last night at 19:39 from Trömso, Norway. The satellite will begin its regular functions today.