“I am happy to be in Erdoğan's homeland” 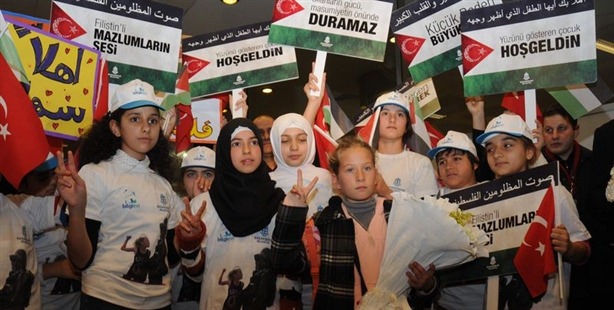 Ahed Tamimi, a 13-year-old Palestinian girl who stood up to Israeli soldiers who had arrested her brother, was invited to Turkey by the Başakşehir Municipality as a guest of honor.

Ahed Tamimi and her mother Neriman Tamimi landed in Turkey yesterday at around two pm, arriving to Istanbul's Atatürk Airport on a Royal Jordanian Airlines flight via Amman. Thirteen-year-old Tamimi and her mother were greeted by students with flowers and waving flags from a 'knowledge center' named after the late Cevdet Kılıçlar, who was killed on the Mavi Marmara.

While Ahed made the sign of victory to news reporters, students had arrived to the airport wearing t-shirts with images of the young girl standing up to Israeli soldiers.

TAMIMI TO RECEIVE AWARD FOR COURAGE

While in Turkey, Ahed Tamimi will be the recipient of the Hanzala Courage Award handed out by the Başakşehir Municipality and will also participate in a panel on Palestine where she will provide a child's perspective on the painful events happening in her nation.

Ahed Tamimi, whose father is already in prison, stood up to Israeli soldiers when they arrested her brother, in a display of courage talked about all over the world.