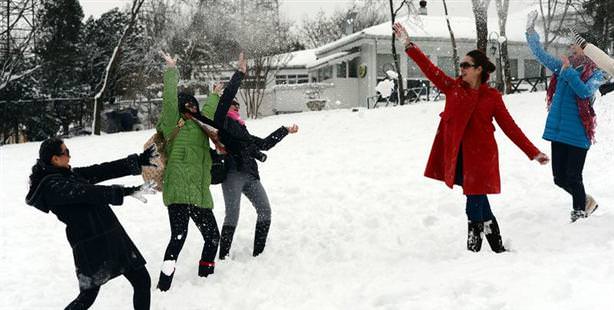 The Istanbul Governorship has issued an announcement warning citizens of snowfall intensifying throughout the day.

The announcement states that according to the most recent information received by meteorology officials the ongoing snow fall in Istanbul will continue and intensify throughout Wednesday.

"Taking into consideration the negative conditions on streets for both vehicle and pedestrian traffic due to ice and frost build-up, it has been deemed necessary for precautionary measures that all primary, elementary, middle and high schools go on break on Wednesday, January 9th. All handicapped and pregnant personnel employed in public institutions and establishments will also be on administrative leave the same day."

OFFICIALS WARN OF POTENTIAL FROST AND ICE FOR TOMORROW

A written announcement released by the Istanbul Metropolitan Municipality has announced that due to ongoing efforts throughout the night, the city's main traffic arteries are not experiencing serious disruptions due to ice and frost. Beginning last night and until the early morning hours, 1,956 personnel came out to assist in plowing and clearing ice and 735 vehicles, 1,896 tons of ice and 335 times of solution were used in the process, stated the announcement.

Officials also shared that 471 people sought shelter and were cared for at the Metin Oktay Sports Center, which was set up to accommodate the homeless and those in need while the heavy weather conditions prevail throughout the city.

SNOW DEPTHS IN A NUMBER OF ISTANBUL DISTRICTS

BEWARE ON THURSDAY FOR ICE AND FROST

The announcement also states that there is expected to be heavy frost and ice on Thursday and asks citizens to be careful. The announcement also emphasizes that all drivers on the road should be equipped with the necessary equipment to handle the harsh weather conditions such as snow tires and chains.