“I will not permit operations while the PKK withdraws” 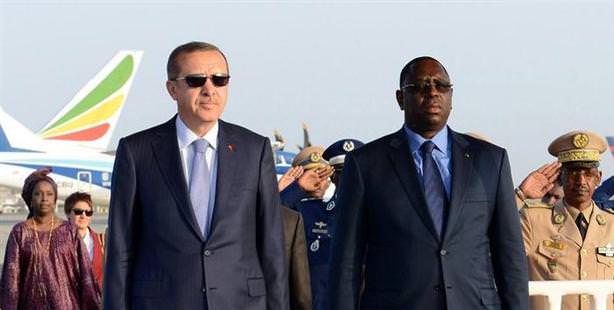 “I have never lost hope,” Erdoğan said from Senegal assuring that the ongoing process of peace talks with the PKK will continue as long as they remain faithful to the headings established during this negotiation process.

Prime Minister Tayyip Erdoğan responded to questions from the press in the Senegalese capital of Dakar, which was his third stop of a three-country tour of Africa. Commenting on the ongoing process of negotiations with the PKK to drop their weapons, the prime minister expressed his resolve by stating, "I have never lost hope." Erdoğan also mentioned that he has even requested a television be placed in PKK leader Abdullah Öcalan's cell. The following are a serious of questions and the prime ministers' responses to the ongoing process to put an end to terrorism, deliberations with the terrorist organization leader, Turkey's National Intelligence Agency and the situation in Syria:

What sort of step will Turkey be taking in negotiations at İmralı?

"This is not a new process. This current process is simply one which has been ongoing that has now resumed after disruptions due to the election. During this process, negotiations at İmralı, in the mountains (Kandil) and in Europe will each hold their own importance. In the past, the organization in the mountain was under Öcalan's command. If you were to ask him himself even now, he would still say, "the mountain camps are in my control," however there is a division. One side is in favor of violence and the other evaluates violence differently and is in contact with Öcalan. Of course, there is also the leg in Europe, the political wing. Then there is also the political extension in parliament. We said that we would fight against the terrorist organization and would negotiate with its political offshoots.

In this most recent incident, we did not negotiate anything with the terrorist organization. Their political extension and our colleagues held deliberations. They agreed on sending two individuals (Ahmet Türk and Ayla Ata Akat) to negotiate. The ongoing process with İmralı will continue as long as they remain faithful to the headings established during this negotiation process. There is no way we can reach an agreement so long as they have not laid down their weapons. There is no way only some can surrender while others do not.

So, what can we guarantee them? As you know, there have been attempts made in the past in which they were ambushed along the border or operations staged against them. We can ensure that we will do everything in our power for that not to happen. That is because if this sort of vow is being made and they are evacuating our country based on the condition of laying down their weapons, then we will not allow something like this to happen just at the point of putting an end to terrorism in our country."

What will they receive in return?

"There is no such thing as something in return. They pay a heavy price. They remain afloat through smuggling drugs and human trafficking and are in constant threat. Would you call the lives they lead in the mountains, a good life? They will now be able to save themselves from this life and maybe create a normal one for themselves. We know what the living conditions are like for the women and how long they live from their own testimonies. This does not solely pertain to Turkey; the same goes for Kandil and the Mahmur Camp. This is the reason we are negotiating with Northern Iraq and those who question this either do not or choose not to consider these other aspects. We want to do whatever is needed in order to establish peace and save this country from this plague of terrorism."

Can you provide any information on some of the main topics to be discussed at İmralı and what sort of schedule will follow?

"In these sorts of situations there is no definite schedule. However, the road map is directed at obtaining the objectives we have established. We will continue this process until we reach the targets we designated. Our main concern is to reap results as soon as possible."

When asked if 2013 will be the year in which a solution is reached on the Kurdish issue, Erdoğan responded by stating, "This is not a mathematic situation."

Reporters also asked Erdoğan if the issue of offering education in the Kurdish native tongue was on the table, to which he responded that, it is not currently on the agenda, because the government will not allow any changes that could cause a division in Turkey. "We have provided all possible options to study the mother tongue in Turkey. They are welcome to take elective courses in college or in high school," the prime minister stated. Erdoğan also referenced the Turkish minorities in Germany, where even though the legal framework is granted for Turkish education, "they are still unable to benefit from this right," stated the PM.

Erdoğan also commented on the speculation the government may switch Öcalan's sentence from life imprisonment to house arrest, by stating that it was out of the question. "House arrest is not even an option. This matter has already been established and Öcalan's situation and location is set. At present, Öcalan is staying in a 12 meter-squared sized cell. They showed me a room today (at Senegal's Goree Island) where 12 people were being kept and it was just 2.6 meters by 2.6 meters. Öcalan's room is 12 meters squared. He has a bed and a radio, which I have given the orders to be switched with a television. There are also five other convicts there, which he gets to see and talk with everyday for an hour in the courtyard. He is being taken well care of at a very high cost to the state in order to protect against any external attacks," stated Erdoğan.

When asked if he was hopeful that the issue of terrorism will come to an end in Turkey, Erdoğan stated, "I have never lost hope. I continue to harbor hope and wish the media would show the necessary sensitivity on the subject and support this process. Our security forces will continue their fight against terrorism with full determination"

'MİT has become even stronger'

When asked to comment on whether the negotiations with the PKK leader were trying for Hakan Fidan, the Undersecretary of Turkey's National Intelligence Organization (MİT), Erdoğan said that quite the contrary MİT is undergoing a serious transformation and one of a more dynamic structure. Prime Minister Erdoğan mentioned that through an exchange, a property belonging to the Ankara Metropolitan Municipality has now been handed over to MİT and will become an intensive training institution. "MİT is moving up from being a domestic institution and is now becoming an intelligence organization in an international position."

"Assad is being misleading"

Will there be an intervention in Syria?

"Of course, there a variety of ways to intervene, whether it is done so logistically or in another manner the schedule and road map is extremely important. However, we must openly state that the Islamic world and the Arab world have not taken on the position expected. What I think is positive here is the fact that the Syrian public is trying to stake claim to determining their own future. Now Bashar al-Assad says, "These are terrorists that have come from outside Syria." By doing so, he is partially inferring our involvement in the crisis. This is nothing other than misleading. Those fighting in Syria are Syrians themselves. This man's father killed 30,000 people in Hama and Homs. In the beginning nobody expected Gaddafi to end up how he did. I was one of those people who were saddened by his demise. It is also uncertain how this situation will develop."

This is a translation of an article originally written by Mahmut Övür.