Erdoğan shares his secret for staying energetic with Tuana 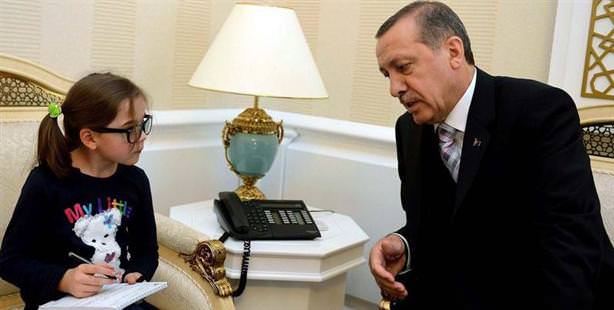 Prime Minister Erdoğan provided an interview to an eight-year-old primary school student, Hale Tuana Hançerkıran, for a school project. Erdoğan even responded to the young reporter’s question of how he remains so energetic.

Erdoğan met with Hali Tuana Hançerkıran, an eight-year-old student from the Turhan Fevzioğlu Primary School, in his office at the assembly after the Prime Minister addressed AK Party members at a parliamentary group meeting and answered a series of questions she had prepared for a homework assignment.

Tuana arrived to the parliament with her father Tuesday morning and had the opportunity to speak briefly with Prime Minister Erdoğan prior to his address at the AK Party Group Meeting.

Erdoğan told the young student that he had a grandchild just about her age and asked her if she knew his name. Tuana whispered his the prime minister's name into his ear and then told him that she wanted to interview him for a school project, to which Erdoğan responded that he would be able to give her an interview in his office following the parliamentary group meeting.

After this short conversation, Tuana listened to Prime Minister Erdoğan's entire speech from just behind the lectern. Tuana applauded Erdoğan from time to time as he addressed the AK Party at the parliamentary group meeting and was also seen playing with a toy the prime minister had given her.

Tuana also asked Erdoğan how it feels to be Prime Minister, to which he responded by stating, "It is a job that has great responsibilities and is a very important duty which gives one the opportunity to serve their nation and homeland."